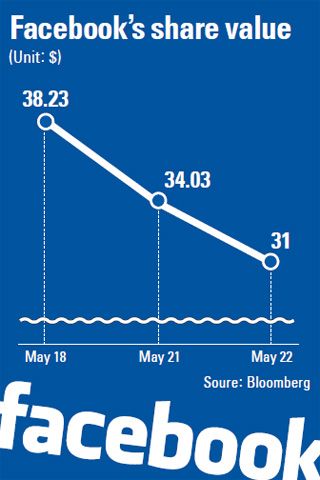 When Yahoo’s stock nosedived 11 percent one day in September 2006 amid forecasts of lower earnings results, shares of Korean tech enterprises such as Daum Communications and Neowiz on the secondary Kosdaq also shed up to 3.1 percent.

Six years later, the connection between U.S. tech shares and their Korean counterparts seems to have weakened. Friday’s highly anticipated Facebook IPO is a case in point.

As its shares tumbled 11 percent on Monday, and another 8.9 percent Tuesday, to end at $31, 18 percent below their offering price, shares of NHN, which operates Korea’s top portal site Naver, seemed unaffected.

The company has been cited as potentially the biggest beneficiary of Facebook’s debut on the stock market, but its shares closed 0.4 percent higher at 230,000 won ($196) yesterday after also climbing Monday.

Kiwoom Securities analyst Ahn Jae-min said this was largely due to investors seeking safe havens amid instability in the Korean stock market, which has suffered from the revived debt crisis in the euro zone. The Kospi recorded a five-month low last Friday as it slumped below 1,800.

“Korean firms were affected by Yahoo in 2006 as profit-making through Internet advertizing was still in its infancy, and it was hard to foresee if search firms could actually make money from this channel,” he said.

“We have long since passed that phase, however, and Daum and NHN are actually ahead of Facebook in the sense that Korean companies have established solid Internet advertizing models, while Facebook is still searching for one.”

A number of other Korean tech firms that were expected to be affected by Facebook’s listing performed poorly yesterday. But that was mainly because the Kospi dropped 20.07 points, or 1.1 percent, to finish at 1,808.62. The Kosdaq retreated 1.2 percent to 455.9.

On the Kosdaq, Daum Communications, the nation’s second-largest portal site operator, edged down 0.9 percent to end at 106,500 won, and Neowiz Internet, which runs the Bugs music streaming timeline app on Facebook, tumbled 3.9 percent to 16,000 won.

Neowiz fell as its Q1 earnings guidelines, which were revealed on Tuesday, indicated a net loss of 250 million won. But analysts remain optimistic about the longer-term influence of Facebook’s IPO.

“The Facebook listing could actually give NHN’s business portfolio a boost, given their similarities in such areas as mobile social networking services and games,” said Kim Seok-min, an analyst at Hyundai Securities.

“Facebook could be seen as a rival to Korean Internet enterprises, but the level of threat it poses is not high. Rather, it is likely to help increase their value,” said Kim Jin-gu, an analyst with NH Nonghyup Investments Securities.
By Seo Ji-eun [spring@joongang.co.kr]