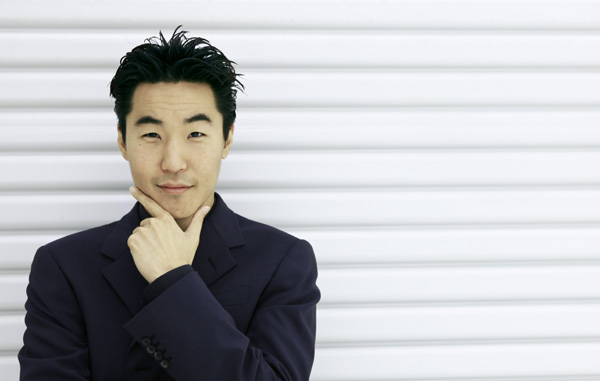 
BUSAN - Hubert Lee, the 39-year-old Korean chief designer at Mercedes-Benz, described the difficulties entailed in balancing simplicity with eye-catching design shortly after he unveiled the new M-Class SUV in Busan on Tuesday.

He named the eye-shaped headlamps as a key design component of the new vehicle, the first SUV launched in Korea by the German luxury car maker.

The housing is oval-shaped like a human eye, while “the projection beam is circular, resembling the pupil, and the light line looks like an eyelid,” Lee said.

The combination of the two gives the car, and other new Mercedes on which the headlamp appears, a more challenging and aggressive image, Lee said, adding that he tried to imbue the front of the chassis with vaguely human characteristics. 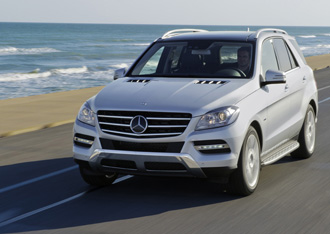 However, he said the rippled side skirting was the favorite part of his design as these “determine the whole image of a car.” Wider flares make for a sexier SUV, he explained.

The third generation of Benz’s M-Class SUV lineup features the first full makeover in seven years, with a new accent on power, machismo. Critics have blasted it for being a little on the simple side and lacking enough prominent characteristics.

The M-Class was first launched in 1997 and some 1.2 million units have been sold worldwide.

“I wanted to express the characteristics of an off-roader as well as the image of a comfortable and luxurious Mercedes’ sedan,” said Lee, who graduated from Rhode Island School of Design and Art Center College of Design Pasadena.

As a high-volume seller, the M-Class needs to appeal to various classes of consumers, making it a different beast altogether from niche models like coupes and convertibles, which he is used to designing, he said.

Lee cited Kia Motors Rio, called Pride in Korea, as a subcompact with mass-market appeal for all ages.

Mercedes M-Class SUVs are hot sellers in the United States, with sales of the second-generation model eclipsing those of BMW’s W5 and Porche’s Cayenne, according to Lee.

The Californian took a position with Mercedes in 2002 and later served as a creative director of one of its five advanced design studios. He is credited with introducing innovation to the traditional German sedan brand by designing the second generation of its four-door CLS-Class luxury coupe in 2011.

Lee is also famous for his concept cars, such as the F800 and Biome, both of which were showcased at motor shows in Geneva and Los Angeles in 2010. He also introduced the hydrogen-powered F125! - built to fete the carmaker’s 125th anniversary - at last year’s Frankfurt Motor Show.

At Tuesday’s launch ceremony, Mercedes-Benz Korea CEO Thomas Urbach declared a new era for Mercedes in Korea. “For Benz, the launch of its first SUV is a second start,” he said. “It has growth potential in the Korean local SUV market, which has been successfully pioneered by BMW and Audi. Benz will help expand the current SUV market.”

He said public recognition of the carmaker’s SUV lineup remains relatively low in Korea but this leaves much room for growth.

The launch ceremony came two days ahead of the opening of the Busan International Motor Show 2012, which runs from today through June 3.