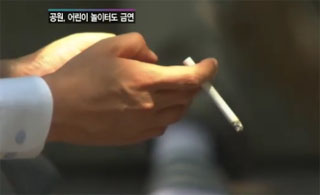 As part of efforts to turn all public areas in the capital city into smoke-free zones, the Seoul Metropolitan Government said yesterday that it will begin enforcing smoking bans in more public places next month.

In June, the city will impose fines of up to 100,000 won ($85.3) on people found smoking in 1,950 non-smoking areas including parks, children’s playgrounds, squares and bus stations. Of the 25 districts in Seoul, five district offices in Gwanak, Gwangjin, Dongdaemun, Gangdong, and Dobong already began enforcing smoking bans last March.

The remaining district offices - excluding Seodaemun and Jongno - will also levy fines on smokers at parks from July. The Seodaemun office will start enforcing the ban from September while the Jongno office will begin in January of next year.

The Seoul Metropolitan Government says a smoking ban in public places is effective in reducing second-hand smoke. From January to April, the city government altogether fined 248 for smoking in public squares and 123 for smoking at median bus stops.

Seoul had designated January to March as a grace period before enforcing the smoking ban. It sent out 23 officers to crack down on smokers at non-smoking areas, including 20 plazas and 339 median bus stops.