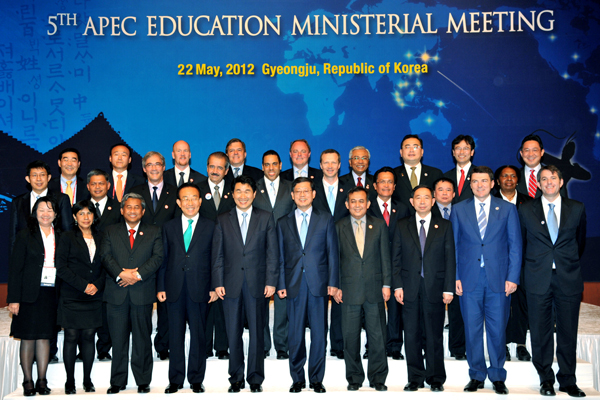 
An Asia-Pacific Economic Cooperation (APEC) forum on education on the ministerial level concluded a three-day run yesterday and released a joint statement, which will be reported to APEC member country leaders at their meeting in Vladivostok, Russia, in September.

Participants unanimously agreed to the Gyeongju Initiative on the last day of the 5th APEC Education Ministerial Meeting held at the Hyundai Hotel in Gyeongju, North Gyeongsang. The joint declaration promoted an education cooperation program proposed by Korea and other exchange among countries, emphasizing that education is the key to achieving economic growth. With the theme of “Future Challenges and Educational Responses: Fostering Global, Innovative and Cooperative Education,” hundreds of educational officials and experts from the 21 APEC countries gathered to discuss the educational reform, the shift to technology-based learning and the globalization of education. The results of the initiative will be reported in four years’ time at the next educational ministerial meeting.

Education officials from Korea and the U.S. further agreed to come up with a joint policy on how to deal with school violence, a timely societal issue here, in bilateral talks on Tuesday. Korea also agreed to academic exchanges with China, with 200 Chinese professors to come to Korea and 60 Korean professors to go to China this year.
By Sarah Kim[sarahkim@joongang.co.kr]