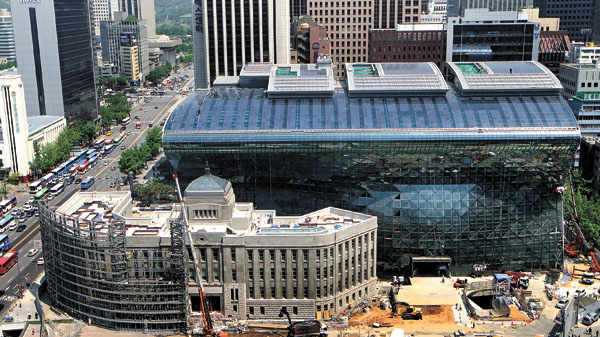 The temporary structures and scaffolding around the construction site of Seoul City Hall will be completely removed today. The new building has generated controversy for its aesthetics, its incorporation of a colonial era building, as well as its energy efficiency. By Choi Seung-shik


Five months before the opening of the new Seoul Metropolitan Government complex, the temporary structures and scaffolding around the construction site will be completely removed by today, revealing the old city hall from colonial times and a shapely, new structure of undulating glass rearing over it.

After three years of construction, the new building, built with 7,000 glass panels at the cost of 298.9 billion won ($256 million), is just about complete. The project, which was supposed to give Seoul a new landmark and possibly a recognized symbol for the city, has generated controversy for its aesthetics as well as its energy efficiency.

In recent years, many newly built curtain-wall public buildings have been criticized for their lavish designs and high utility bills. The new city hall will face scrutiny as its opening approaches.

“It’s kind of a surprise that the city has built another curtain-wall building after the controversy over the energy saving issue,” said Park Jeong-nam, a 39-year-old office worker at an international trading corporation located nearby.

The Seoul Metropolitan Government insists the building has a high thermal efficiency. Although the building has glass walls on the exterior, inner walls 6.3 centimeters (2.5 inches) thick were installed to block the heat and cold that penetrates the glass.

The government also said that working spaces are 10 to 15 meters away from the glass walls. Hallways are situated between the outer and inner walls.

“We used ‘Triple Low E’ glass, which has better thermal efficiency than normal glass,” said Lee Jeong-hyu, director of the Public Utilities Division of the city government “This special glass was coated three times. While sunlight can come in, it blocks heat and cold.”

According to the city government, the glass panels were imported from the United States and 7,148 units were used. While the panels were all priced differently, the triangular glass panels used on the building’s front, overlooking Seoul Plaza, cost an average of 260,000 won per square meter.

According to the city government, large panels of glass were imported from the U.S. and then cut into smaller shapes in Korea.

Architects and critics are already debating its pros and cons.

“It looks like a building from the expressionist era of 20th century Europe,” said Kang Seok-hu, head of the Seoul Institute of Registered Architects. “You get the feeling of a big swagger.”

Another expert gave a more moderate review. “The structure of glass and steel reflects the current trend,” said Shin Hye-kyung, the Head of Korea Institute of Construction and Transportation Technology Evaluation and Planning.

Shin said the new building is okay, but she didn’t approve of the design clash between the new building and the old. “It’s not too late to talk about removing the old building standing in front of the new one,” she said.

The old city hall was built in 1926 during the Japanese colonial period and was the headquarters of the governor-general of Korea. While many argued that it should be obliterated because it was a reminder of Japanese colonial rule, the city government decided to maintain most of the building for its historical value and remodel it for use as a public library.

The designer of the new building defended his project.

“I have taken into account the harmony between the two,” said Yoo Kerl, the founding partner of the architectural firm iARC. “The design is to reflect waves.”

The project hit several road-bumps during construction. The Cultural Heritage Administration said the new building, if built too high, would create a shadow over Deoksu Palace across the street, so the original plan for a 21-story new building was scaled back to 13 stories. It is not big enough for all the city’s civil servants. Of 4,000 city officials, only 1,800, or 45 percent, will move in next October.