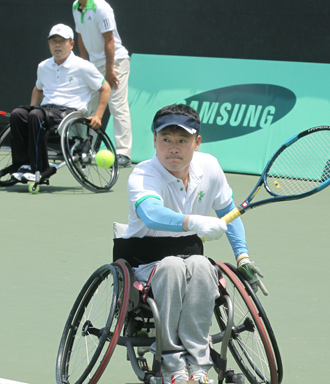 Korea’s Nam Myung-sik returns a shot during the men’s double match against the United States at the 2012 BNP Paribas World Team Cup in Seoul on Monday. The international wheelchair tennis championship was hosted in an Asian country for the first time. [YONHAP]

The tennis courts in Olympic Park, southern Seoul, are hosting an international tournament that is quite different from any competition that has taken place under its lights before.

Sounds of racquets smashing balls and cheers from the stands are almost absent compared to the major tennis tournaments held in Seoul in the past. And the balls are allowed to bounce twice.

But the biggest difference is that the players on the court zip from alley to alley on wheelchairs while holding a racquet in one hand.

While the rules and playing styles seem quite different from a standard tennis match, one aspect is the same as, or perhaps exceeds, that of some professional matches: the passion and desire to play the sport.

The 2012 BNP Paribas World Team Cup, the international wheelchair tennis championship, kicked off on May 20 with more than 300 players from 28 countries and will run until this Sunday.

Hosted by the International Tennis Federation and organized by the Korea Tennis Association for the Disabled, the tournament is marking its 28th edition and for the first time is being hosted by a country in Asia.

The annual event is an international competition during which individual nations compete against each other, similar to the Davis Cup or Fed Cup in tennis.

The World Team Cup first started in 1985 after the number of foreign participants in the U.S. Open Wheelchair Tennis Championships grew. Since then, it has become bigger and bigger, but has typically been considered a sporting event for European and North American countries.

In Korea, it’s been almost 20 years since wheelchair tennis was introduced to the nation, according to the Korea Tennis Association for the Disabled. Although there are only about 150 to 200 wheelchair tennis players in the country, the sport was popular among the disabled.

“Most sports for the disabled begin with their rehabilitation program, but wheelchair tennis provides both a fun and challenging spirit for them,” said Joo Won-hong, the president for the Korea Tennis Association for the Disabled.

“After our players participated in international tournaments and looked around, we thought we also needed to host this world event.”

After two years of bidding efforts, Korea proved in 2010 that it was ready to invite athletes from the world. The country has injected nearly 10 billion won ($8.5 million) to repair outdoor courts and build a new indoor stadium.

And so far in the event, the management and preparations of the tournament have been meeting expectations for participants and visitors.

“There are lots of volunteers and everything seems to go on time,” said Penny Dayan, who came here as a physiotherapist for the Australia team. “Medical facilities are great and I think it’s very well organized.”

Organizers hope the tournament does more than provide a stage for the sport.

Former Minister of Culture, Sports and Tourism Choung Byoung-gug, now head of the local organizing committee for the World Team Cup, expects the tournament could help non-disabled people change views on the disabled.

“When we first tried to host this event, even some government officials looked on with doubtful eyes,” said Choung, who was also the president of the Korea Tennis Association for the Disabled when the nation submitted the bid in 2009.

“However, we wanted to show our people that disabled people have the same passions.”

Choung, who started to learn tennis after watching wheelchair tennis two years ago, said he believed that hosting these events will lead society to become more democratic and open-minded.

The former lawmaker also urged that support for disabled sports continue in Korea.

“Disabled sports give us a lot of courage and makes us push our limits,” Choung said. “We don’t want this to end as one special event, but to be a catalyst to develop a sports environment for disabled people in Korea.”