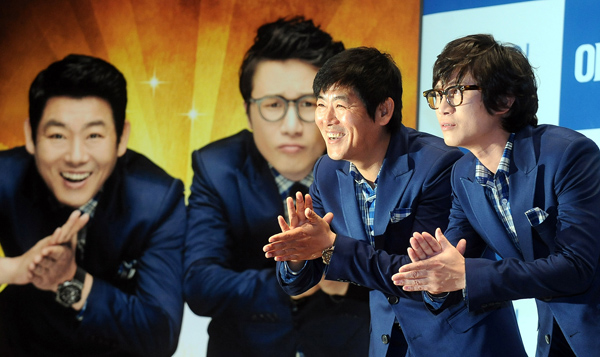 
First-time director Jeong Seung-koo takes a satirical look at Korean society and tackles the delicate art of flattery in his new comedy “Comedy King.” Previously titled “The King of Flattery,” the film follows an ordinary insurance company worker who meets with a master of flattery to learn how to compliment and succeed.

With a release date close to big blockbusters including “Men in Black 3,” Jeong said that his film will differentiate itself from its competition by showcasing a hearty comedy with a backbone.

“The audience will get more than just comedy out of the film. If [blockbusters] have knives, our film has tongues,” said the director during a press conference for the film in Seoul on Wednesday.

“I wanted to make the film in a way that everyone in the audience can reflect on their own working lives in some form or another. It won’t be just empty laughs,” added Jeong, who previously worked with director Lee Chang-dong in the award-winning 2007 film “Secret Sunshine.”

As Dong-sik’s life takes a turn for the worse, with girlfriend troubles and a father who is chased by a loan shark, he meets Hyeo Go-su, who teaches him how to tackle his problems with an artful grip on flattery. With his help, Dong-sik aims to turn his luck around using his new found skills to negotiate with an important client.

The director said that their varied experiences added greatly to the film and that close to half of the dialogue for Sung’s character was the result of the actor’s skillful ad-libs. 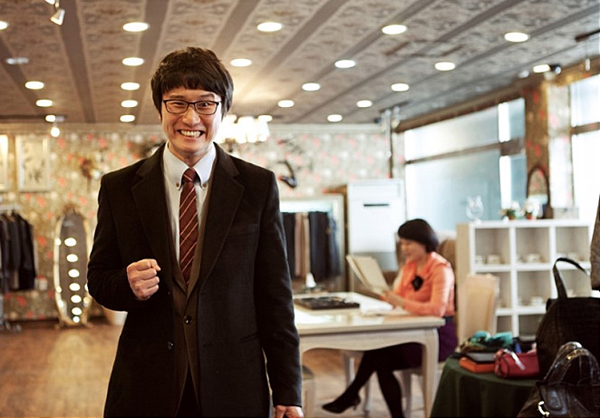 
“Song Sae-beok stayed up many nights with me, sometimes until 11 in the morning, drinking and discussing our roles in the film,” Sung said.

“You will get to see how much effort Song Sae-beok put into his role when you see the film, especially in the scenes dealing with family conflict.”

“I wondered why Sung Dong-il was so affectionate toward Song Sae-beok, it made me jealous,” she joked, while she added that she expects the film to do well with at least three million tickets sold upon its release.

Addressing the rather brief filming period for “Comedy King,” which began last December and finished in March, the director said that there were a lot of positives coming from the filming condition, especially in shining a light on Sung’s impressive comic reflex, to which he credits a big portion of the film’s wit.

“With a short filming schedule, most of the scenes were shot within one or two takes. I think this kind of shooting has pluses and minuses,” Jeong said. “Most importantly, the actors were so funny [in the film]. When I looked at Sung Dong-il ad-libbing through the monitor, I was always pleasantly surprised.”