How to tell a story with a tightrope

How to tell a story with a tightrope 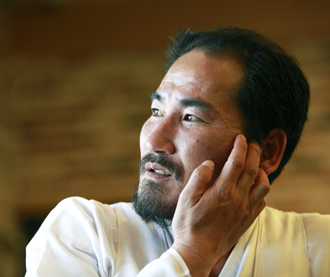 Kim Dae-kyun contemplates as he answers questions during an interview. The jultagi (tightrope walking) performer says walking and meditation help him create plots and narratives that speak to people. By Park Sang-moon

The stage is a rope one-inch thick and ten feet above the ground.

You walk, run, sit and jump on it - all while sticking to the story and engaging in dialogue with other performers on the ground and people sitting in the stands.

While it is an honor for supporters of jultagi, it would be safe to say that no one was as overwhelmed by the news as Kim Dae-kyun, Korea’s Important Intangible Cultural Heritage No. 58.

The title is given by the Korean government to people deemed qualified to carry on the country’s traditions that have historic, academic and artistic significance. Kim is the only person recognized by the government as skilled enough at jultagi to pass on the tradition.

In a recent performance, clad in his typical outfit - white hanbok (traditional Korean clothing), straw hat, and pink fan, all noticeably old and well-worn - the 46-year-old Kim walked the rope without a moment of hesitation.

“Someone once told me that you can get on a fast track to success if you ‘walk the line’ well. It’s been 30 years, but I only have blisters on my butt. Still, one thing is certain - I am looking down on all of you, ain’t I?”

People laughed at Kim’s remarks. Tightrope walking, in Korean, can also mean “getting in line,” which could refer to playing politics - or earning the favor of the right people - in the corporate world.

After a show, the Korea JoongAng Daily sat down with Kim, who has dedicated his life to this rare form of performance art.

Kim has given more than 2,000 jultagi performances. He continues to give between 60 and 70 performances every year all across the peninsula and the globe. 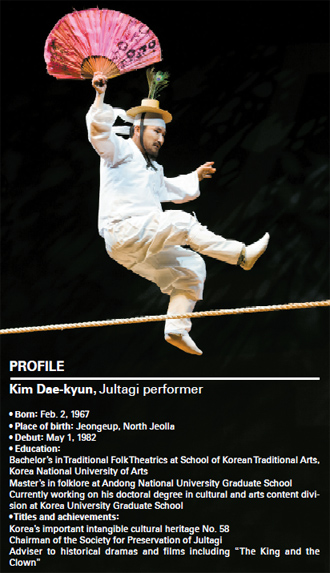 Q. You have been tightrope walking since you were 9. How did you get into this? Were there any moments that you thought of other careers?

A. My father worked at the Korean Folk Village [in Yongin, Gyeonggi], and our family actually resided there.

So growing up, watching samulnori [Korean percussion], pansori [Korean narrative singing] and tightrope walking was just everyday life for me. The entire folk village was my playground.

My master - the late Kim Yeong-cheol, who was intangible cultural heritage No. 9, designated by Gyeonggi - also performed there, and he suggested to my parents that he teach me his skills and take me on as his student.

So I began tightrope walking when I was 9 years old. I was young. I had no fear. It was just a lot of fun and a thrill. I walked the tightrope day and night - about eight hours every day, often lost track of time, and, of course, missed most of my school days. That was my youth.

I did go through something you could call a “crisis” when I was 21 years old - the year my master passed away.

He was my mentor and I was devastated. Then kicked in that confused, juvenile period that I had skipped because I was obsessed with tightrope walking. I started smoking and drinking. I had performed at the folk village everyday since 1982, so it was pretty routine by then. I didn’t train and just hung out. My heart was not in it.

Two years later, though, it hit me: Either I kept performing or no jultagi [would be passed on to the next generation in Korea].

I mean somebody had to carry it on, otherwise the 1,300-year tradition would end right here. It was my calling, my duty for the country and society.

Since that realization, I worked extra hard, with clear determination and a mission - mostly focusing on studying various forms of traditional performing arts that could be implemented in my performances.

Jultagi is a unique art that combines acrobatic skills with witty, clever yet relatable stories, jokes and puns with a backdrop of music, dance and other theatrical elements. Where do you get your inspiration?

I don’t think I do anything special. I take walks, read books and watch performances - just like any others.

Out of all of them, the thing I do the most is take walks - on streets, in markets, to cultural properties and historic sites in different cities and provinces.

I observe people, see how they lead their everyday lives, listen to their stories, try to understand their joys and sorrows. And based on that, I also like to meditate and contemplate.

One of the most important skills required of a tightrope walker is cognitive ability - seeing things others don’t, seeing through people, seeing the real meaning in things and incorporating them into the plot.

Our stories should be relatable to children, university students, parents, etc.

It may sound like a simple thing, but engaging and having a good time with the audience is an important factor in jultagi. The importance of such a skill shouldn’t be underappreciated.

For instance, there is an annual ginseng festival in Yeongju, North Gyeongsang and I recently performed there.

The simplest thing would be to create a dialogue about ginseng. But I have known through my walks within Yeongju that the city was the home of classical Confucian scholars during the Joseon era and that the city takes great pride in this history.

So I insert that into my dialogue, plus I add my imagination to it: How 400 or 500 years ago, right here, the students of Confucianism would have picked gingko nuts, roasted them and ate them during recess. This was quite well received by the locals.

How much longer do you plan on performing? Also, if there is a next life, do you think you will be a tightrope walker again?

In my teens, I was busy learning about the rope and playing with it. In my 20s, I was full of confidence and flew all over it.

When I reached my 30s, I felt like I got to know just a little bit what it meant to tightrope walk. Now that I am in my 40s, the one thing I am 100-percent certain of when it comes to tightrope walking is that being on the rope is like being in total darkness.

I have gone on the rope on rainy days and windy days for more than 30 years. But every time I am met by full darkness, and I must let go of myself and yield to the rope.

Also, like other people I have many thoughts [worries and desires] in my daily life. But when I go up on the rope, I reach a state of no thinking at all - entirely free from everything.

I perform 60 to 70 times a year, which is a lot given that we only perform in the spring and fall.

When I get up on the rope in rehearsal, I get the sense of what the performance will be like, my sense of the day.

So I go with the flow of that day and give as much as I can. And that’s how the day’s performance unfolds - different every day.

You are educating youngsters to be tightrope walkers - which isn’t easy as most parents want their children to be successful at high-paying jobs instead. What are some benefits of tightrope walking?

Currently, I am educating 15 students in Gwacheon, where the Society for Preservation of Jultagi is based. Their ages range between third grade and sixth grade.

For most of them, learning jultagi is just recreation or a part of their broader physical education, so I don’t expect them to understand how I trained eight hours a day - some times 10 hours - when I was their age.

But usually two or three of them are very passionate about jultagi and are quite serious learners.

There are several benefits for teaching your children jultagi. The obvious benefit is the development of physical strength.

When you put someone on the rope - an adult or a child, you know instantly if the person is in shape or not.

Another benefit is jultagi helps children sharpen their minds and develop concentration - which can also help with their studies and other academic pursuits.

What we really need is a larger and better facility for training the young tightrope walkers.

I have called for this repeatedly, and am hoping the recent Unesco recognition helps increase people’s awareness of the issue.