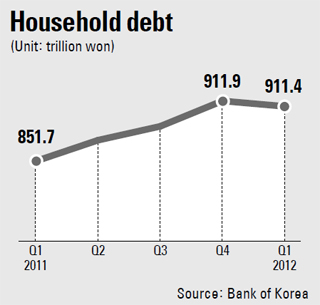 Household debt including credit card spending dipped for the first time in three years in the first quarter, but concerns remain as the riskier nonbanking sector saw more loan growth.

According to the Bank of Korea yesterday, households owed 911.4 trillion won ($772.2 billion), including on payment made by plastic, in the first three months of the year. This marked a 500 billion won retreat from the fourth quarter of 2011.

The figure has not posted a quarterly fall since the start of 2009, when the economy was reeling from the impact of the global credit crunch.

“Although on-year debt still expanded 7 percent, the growth rate has been decelerating since the third quarter of 2011,” said an official at the central bank. He cited the sluggish housing market and the positive impact of employees feeling temporarily flush from their Lunar New Year bonuses as secondary factors after the move away from credit cards.

Borrowing from banks dropped 2.7 trillion won to 453.1 trillion won, but this was partially offset by loans from savings banks, credit unions and other nonbanking institutions inching up on-quarter.

The aggressive inflation of household debt since the global crisis of late 2008 has been considered a ticking time bomb that will not only throw the financial market into a panic but also dent the nation’s economic growth.

Experts have warned that the financial burden caused by high levels of debt will undermine consumer spending, a threat made worse by shrinking exports.

Burdened by rising inflation on essential daily goods and the government’s loose monetary policy, households have been borrowing at record levels.

Concerned by the mountain of debt, the government has pressured lenders to toughen their eligibility rules, relegating riskier loan prospects to nonbanking and private lenders who demand higher interest payments.