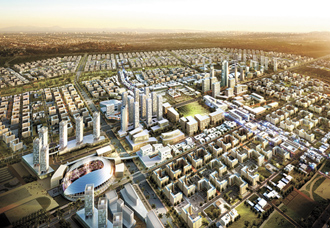 An artist’s rendition of the city Hanwha Group will build for 100,000 families in Besyama, Iraq. Provided by the company

Hanwha Group will construct a new city of 100,000 homes in Iraq, the single largest overseas construction project ever for Korea.

The group said yesterday it will sign an $8 billion contract next week after the Iraqi government recently granted approval to build a 1,830 hectare (4,522 acre) city in Besmaya, 10 km (6 miles) southeast of Bagdad for a seven-year period. The project is part of Iraq’s national reconstruction after the U.S. invasion in 2003.

When the company signs the contract, it will receive 25 percent of the order value of $7.75 billion. Since the contract includes a provision for inflation adjustment, the total value will reach $8 billion, the company said.

It’s Korea’s first order to build an entire city overseas. The city will be as large as Bundang in Gyeonggi and will be largely inhabited by government officials.

Hanwha will build the infrastructure and the housing. The company plans to build mainly Islamic traditional houses and modern houses of 100, 120 and 140 square meters.

“Chairman Kim Seung-youn has been deeply interested in Hanwha E&C’s overseas projects since 2009, and he considered Iraq a crucial market for the E&C unit,” said Park Jong-kook, a Hanwha official. Hanwha E&C Vice Chairman Kim Hyun-chung was a member of a Korean government delegation to Iraq in 2010.

The two sides signed a memorandum of agreement last May.

A major factor in Hanwha landing the contract is the group’s building of the Incheon Eco Metro development in Incheon.

The Incheon project is in its third and final stage, having built homes for 12,000 families in the southern part of the city.

The Iraqi government will provide financing for the construction through three state-run banks. All of the 100,000 homes to be built have been reserved by buyers.