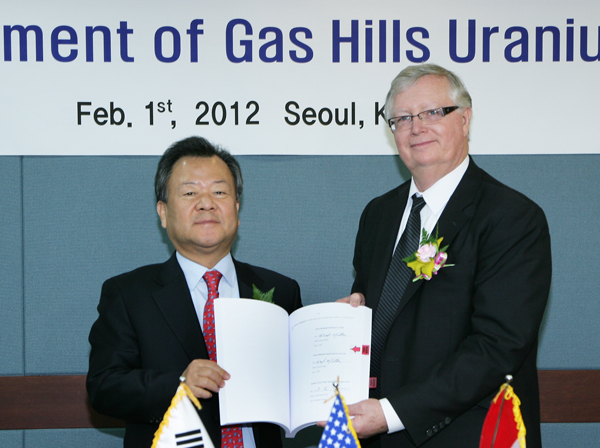 President and CEO of Kepco, Kim Joong-kyum (left) and David Miller, CEO of Canada-based resource company Strathmore Minerals (STM), pose for a photo after reaching a contract to acquire shares of STM. Provided by the company


Korea Electric Power Corporation (Kepco) is aiming to expand overseas business, reinforce its profitability and increase employment to rise as a global electricity company. As part of this strategy, Kepco reorganized itself in February. This group reorganization is to prevent the root causes of the Sept. 15 blackout and to improve its efficiency and transparency. In the meanwhile, it has been able to overcome worsening financial conditions and create jobs by expanding into overseas business, which is higher in profit.

The newly launched Kepco organization has been split into domestic and overseas business divisions. Each is under the direct management of the vice president. Meanwhile, an electricity supplier department has been newly established. Another feature of this reorganization is that the company has strengthened and reinforced its technology engineering and overseas business development fields.

The domestic business department’s priority task is to create a stable supply of electricity. Toward this aim, an energy supply team has also been set up under the guidance of the vice president. Until 2014, the summer electricity supply is expected to be tight, so Kepco is preparing in numerous ways to improve energy efficiency, demand management and its forecasts. It is also setting up an emergency situation management method in order to prevent a second summer blackout.

By establishing a procurement department Kepco is hoping to reduce its cost in electricity and other purchases, which consist of up to 85 percent of Kepco’s total expenditures - and by cutting off excess investment beforehand, the company is seeking sound financial footing.

In addition, Kepco is hoping for the stable development and import of bituminous coal and uranium to reduce the vitality risk of the overseas fuel market. Kepco is planning to improve its competitiveness in cost and technology by fusing its technology departments with an eye for overseas development, power transmission and supply, and civil engineering.

Kepco has also strengthened its overseas business. This means that the company will actively pioneer in renewable energy business as it relates to nuclear energy, thermal power, solar energy and wind energy, M&A and plant construction bidding. To achieve this goal, an overseas business strategy team has been set up directly beneath the supervision of the overseas business vice president.

Overseas nuclear power exports have also been strengthened, and the UAE nuclear business team has been reorganized more efficiently. By improving the competitiveness of its nuclear exports, Kepco is aiming to win the second and third bids of nuclear power plant projects.

Kepco has clinched a deal with Canada’s uranium developer Strathmore Minerals (STM) to buy a 14 percent stake in the company. The deal comes with an option to buy as much as a 40 percent stake in a uranium mine, Gas Hills, located in Wyoming, United States.

Thus Kepco expects to secure approximately 550 tons of uranium annually for 20 years starting in 2016 - approximately 12 percent of Korea’s annual consumption, which was 4,500 tons in 2011. With this deal, Kepco has secured uranium, is able to participate in mine development, select directors and send staff according to the proportion of Kepco’s holdings. By securing co-decision making rights for major issues, Kepco has prepared a base for actual co-operation of the mine.