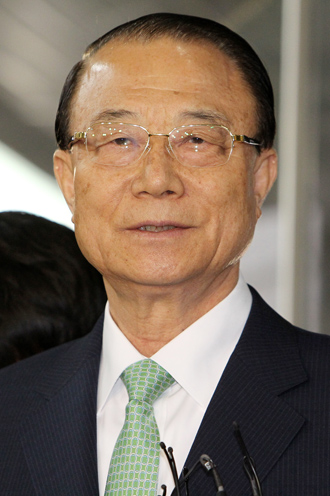 The Seoul Central District Court opened a hearing Wednesday to decide whether or not to suspend the pre-trial detention of Choi See-joong, a close associate of President Lee Myung-bak accused of corruption, so he could get medical treatment.

But Choi was a no-show because he had gone to a hospital without notifying the court.

Choi, a former chief of the Korea Communications Commission and a political mentor to the president, was detained on April 30 on charges of receiving at least 800 million won ($708,000) from a developer of the 2.4 trillion won “pi-city” project in return for using his influence to expedite the construction process.

According to the Seoul Central District Court, Choi asked the court on Monday to suspend his detention so he could have previously scheduled surgery. Before he was taken into custody, Choi told media about the surgery scheduled for Wednesday.

The court started a hearing on Choi’s petition at 10 a.m. Wednesday, but he did not appear because he had already been moved from the Seoul Detention Center to Samsung Medical Center. The prosecution and the court said they were not notified in advance about the move.

According to sources at the hospital and detention center, Choi was transported to the hospital on Monday. An operation to treat an abdominal aortic aneurysm began 7 a.m. yesterday.

“It’s the first time for me to have a suspect in the hospital when I have yet to make a ruling to suspend his detention,” said Judge Jeong Seon-jae.

The prosecution said it was only notified about Choi’s move Monday afternoon after he was admitted to the hospital.

Under the law, a pre-trial detention center warden has the right to make a decision to allow an inmate to receive outside medical treatment when the need arises. The law does not require the detention center to inform the prosecution or obtain permission to transport a pre-trial detainee to a hospital, although reporting to the Ministry of Justice is still required.

According to the Seoul Detention Center, an official accompanied Choi and is monitoring him there. The center said Choi is technically still in the center’s custody.

It normally takes about two weeks for a patient to recover from such an operation, but Choi, 75 years old, may take a longer time, a hospital official said.