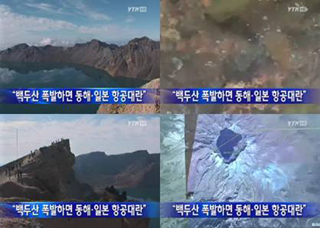 A volcanic eruption of North Korea’s Mount Paektu could be similar to the 1980 eruption of Mount St. Helens in the United States, a Japanese expert said, after he claimed last week such an explosion was highly probable.

Mount St. Helens erupted in Washington State in May 1980 following a large earthquake, killing 57 people in the deadliest volcanic event in U.S. history. The eruption was rated as 5 on the Volcanic Explosivity Index (VEI).

The VEI scale ranges from 0 to 8 with an increase of 1 index point indicating an eruption 10 times more powerful.

Eruptions designated as having a VEI of 5 or higher are considered “very large” explosive events, and occur worldwide on an average of only about once every two decades, according to the U.S. Geological Survey, a scientific agency of the U.S. government.

Hiromitsu Taniguchi, a professor emeritus at Tohoku University and a renowned volcanologist, said in an interview with Yonhap News Agency on Wednesday that an eruption of Mount Paektu could reach 4 or 5 on the VEI, should it occur.

Last week, Taniguchi claimed in the Japanese media that there was a 99 percent chance the highest peak on the Korean Peninsula would erupt in the next two decades due to the impact of the 2011 massive earthquake in Japan.