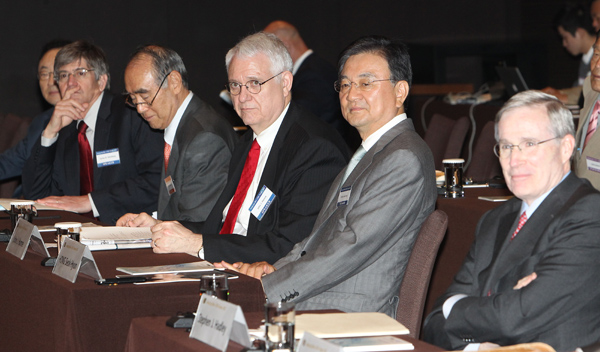 Leading scholars and opinion leaders of South Korea and the United States gathered together for a forum in Seoul yesterday, discussing North Korea’s future under its new leadership and policy direction toward the regime.

At the JoongAng-CSIS forum, co-hosted by the JoongAng Ilbo and the Center for Strategic International Studies, a U.S. think tank, Victor Cha, Korea chair at the CSIS, said that Kim Jong-un’s reign is adding uncertainty to the already volatile country.

He said it could be threatened by the possible death of his ailing aunt Kim Kyong-hui, who Cha said is the only high-ranking blood relative of the young leader.

Stephen Hadley, former national security adviser to the former U.S. President George W. Bush, said Seoul and Washington also share the responsibility of the behavior of North Korea for failing to send a consistent message that its bad behavior won’t be rewarded.

He said that the upcoming administrations of South Korea and the U.S., both taking office next year, need sufficient time to coordinate policies on North Korea.

Kim Hyun-chong, Seoul’s former Trade Minister, said that the North’s military-first policy and its call for economic self-reliance are contradictory. He called for an injection of the capitalist system into the North.

For instance, the South can contribute to it by opening a free economic zone in Dandong, a Chinese city bordering the North, and exposing the North to more market experiences, Kim said.

Hong Seok-hyun, chairman of JoongAng Ilbo, said that despite all the speculation of provocative moves by North Korea, the world should not miss “subtle soft-line messages in Kim Jong-un’s words.”

“It is obvious that this new leader is taking a different approach from that of his father and grandfather,” Hong said in an opening speech of the forum. “Therefore, it is considered wise to read between the lines of such changes and to maximize the new context by augmenting efforts of reconciliation while severely responding to physical provocations.”

The participants of the forum also talked about China’s rise and how the world should cope with it.

Hadley said that internal challenges, as seen in the cases of Bo Xilai and Chen Guangcheng, is leading China to realize the necessity of more accountability in the government and political freedom in order to ensure continuous economic prosperity.

John Hamre, the CSIS president, agreed, saying the country is becoming too complex and dynamic to be governed by an authoritarian mobilization and China will evolve into a government structure based on much greater representation of its citizens and a rule of law.

Moon Chung-in, Yonsei University professor, warned against objectifying China too much, and said the world needs to recognize the country’s efforts to be involved in an international order. James Steinberg, former U.S. Deputy Secretary of State, said the U.S. and China are in a positive sum game, and the U.S. does not consider development of Seoul-Beijing ties as turning back on Seoul-Washington ties.

Steinberg also said other Asian players such as India can play a strategic role keeping China in check and making the region a healthier multilateral place.

Japan’s role for Asia, however, is still limited, according to Chang Dal-joong, international politics professor at Seoul National University, who said the country needs to clarify its Asia policy.