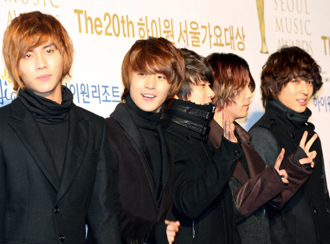 Hallyu band FT Island has been singled out by leading Japanese music channel Space Shower TV Plus and will be the focus of a special program set to air on Sunday.

The one-hour show will feature a live acoustic set as well as interviews and moments from the studio.

Performances of the band’s hit songs, including “Flower Rock” and “Venus,” will be aired on the show.

On May 16, the boy band released its second Japanese album, “20.”It sold more than 20,372 albums on the day of its release and rose to the third spot on Oricon’s daily chart.

The band performed well on the weekly chart, too, usurping the fourth slot with a total of 41,726 records sold in the first week.

To mark the launch of the album, the band held a fan meet event last weekend. At the meet-and-greet mini-concerts, the band sang a total of five songs including “Wanna Go,” which was composed by members Song Seung-hyun and Choi Min-hwan. Group leader Choi Jong-hoon’s track “Stay” was also performed.
By Carla Sunwoo