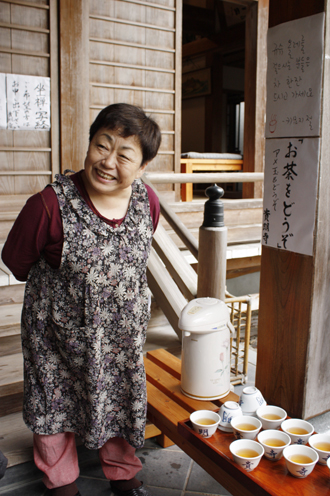 Kyushu - In Jeju dialect, olle, which translates to “a narrow path leading home,” was adopted as the name of the island’s vast hiking course that was established five years ago. While there are only some 10,000 native speakers, the Jeju phrase is now rolling off the tongues of hikers across Asia.

In Kyushu, Japan, the island’s major trekking courses have imported both the name and concepts of Jeju’s trails. Early this year, the Kyushu Tourism Promotion Organization together with the Kyushu District Transport Bureau of the Ministry of Land, Infrastructure, Transport and Tourism decided to recreate trails as part of its “Visit Japan” project.

After the devastating tsunami and nuclear crisis in March of last year, the government boosted its efforts to bolster the plunging tourism industry. Targeting those with a passion for the outdoors was one solution.

Inspiration came from the original Jeju Olle Trail, which was established in September 2007 by Suh Myung-sook, a 55-year-old former journalist, and has become a major tourist attraction in Korea over the past few years.

Noticing this surge, Japan hoped to recreate the phenomenon. The Kyushu Tourism Organization signed a contract with the Jeju Olle Corporation, which Suh heads, in August of last year, which stipulates an annual payment of 1 million yen ($12,180) in royalties.

Last weekend, I flew to Japan along with several other reporters from Korea to walk all four of the Kyushu Olle trails, one on each day. Upon landing at the Fukuoka Airport, located in the northern part of Kyushu, we hopped on the shinkansen, or bullet train, down to the southern part of Kyushu to start the Ibuski Olle Trail, then made our way north.

Like Suh said, the routes of all four trails were identified by blue and red ribbons, similar to that of Jeju (Jeju uses blue and orange), and blue kanse, signposts shaped like ponies, one of the symbolic animals of Jeju.

If you want to try out all four Olle trails while you are in Kyushu, the most effective plan would be to start from Ibuski then hike north, as Ibuski is considered the easiest trail and it is the path that most resembles Jeju. 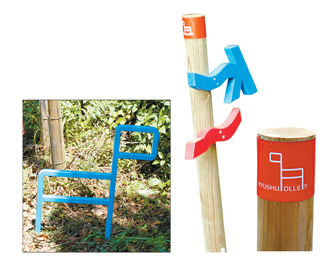 The Ibuski Olle Trail, which stretches 20.4 kilometers (12.6 miles), starts from the vacant Nishioyama Station, where you can get an official stamp certifying you made it to the spot.

While the trail is the longest course among the four, it is the easiest with flat roads and few hills. The path passes through a small village and stretches along the beach until it turns into a pine tree forest. A 70-year-old private herb garden follows shortly, where you can purchase teas, bath oils and air fresheners, all made out of the garden’s natural herbs.

Although the trail is a one and a half hour drive from Kagoshima Airport, from which direct flights to Incheon International Airport are scheduled three times a week, it is definitely worth visiting. The destination has a surprise waiting that the other trails don’t offer: a sand bath.

Some traditional ryokans, or Japanese inns, offer sand baths, during which professional “shovelers” bury you from the neck down inside hollows of hot volcanic sand for which Ibuski is famous. These shovelers are said to be professionals as they adjust the temperature with the speed of their shoveling, usually ranging from 40 degrees Celsius (104 degrees Fahrenheit) to 80 degrees Celsius. You should unearth yourself after 15 minutes as you may get a minor burn if you stay buried any longer.

But one downside of this trail is that many parts of the path are paved rather than being the natural dirt characteristic of the Jeju Olle trails.


If you prefer a more dynamic course, the Olle trail in Kumamoto Prefecture is the most challenging course, crossing over two mountains. Although Olle is supposed to be a walking path, the Amakusa and Iwo Jima Olle trail can be more of an inclined path at times. It is still manageable for amateurs who have never climbed a mountain before.

According to Yuki Kawabata, the mayor of Kami Amakusa City, the citizens of Amakusa and Iwo Jima have worked together to create the path for the trail, which stretches 12.3 kilometers. “The citizens tried out the trail and tied ropes in areas that seemed dangerous, while high school students volunteered to pick up rubbish along the beach,” Kawabata said.

The food of Kumamoto including the Kuruma shrimps is another benefit of the Olle trail in Kumamoto Prefecture, according to the mayor.

“We will create programs that promote the Olle trial with Kumamoto’s famous food,” he said.

The Okubungo Olle Trail in Oita Prefecture is packed with unique Japanese features, passing through a bamboo forest, traditional Japanese gardens, the ruins of an Oka castle and the Fukoji shrine, where you can find Kyushu’s biggest stone Buddha. If you are a piano player, you can play one inside the sanctuary, and if you are skillful enough, the chief priest will offer you a glass of juice.


The Okubungo course, which stretches 11.8 kilometers, ranks third in terms of difficulty.

Finally, the Takeo Olle Trail in Saga Prefecture is the perfect way to end your Olle journey as the town is famous for the onsen, or spa, that is well known for its alkaline water. The trail is also located just an hour away from Fukuoka Airport, which makes this the most accessible among the four trails in Kyushu.

The 14.5-kilometer course starts from JR Takeo-Onsen Station, where you can purchase Takeo bento, or a Japanese-style boxed lunch. The Takeo Olle Trail also offers two different routes - one easier than the other.

The difficult route is mountainous and quite steep. During parts you have to hold on tightly to a rope that is tied to a tree. But nothing will beat relaxing in a hot spa after some scary moments climbing down the mountain.

Although all four trails are charming in their own ways, there is still work to be done.

“There are some shortcomings to the Olle trails at this moment as it is in an early stage, such as making pamphlets in different languages to explain about not only the Olle trail but also the attractions,” said Toshiro Mochimasu, manager of the overseas division at the Kyushu Tourism Promotion Organization.