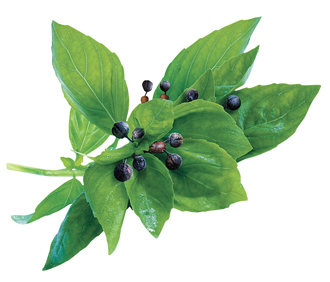 Lee Gi-beom’s success story began when he was diagnosed with cirrhosis of the liver almost two decades ago and has resulted in him now running a billion-won business - all courtesy of a drink that can allegedly neutralize hangovers.

The Gongju, South Chungcheong, native began experimenting with extracts of a variety of the Oriental raisin heotgae after hearing rumors of a miracle cure for the dreaded morning after.

He began cultivating the berry - which contains traces of dihydromyricetin (DHM) that can block the effect of alcohol on the brain - in 1995. Last year, his company, Gold Herb, recorded sales in excess of 1 billion won ($843,500). It now has over 3,500 regular customers.

“They are mostly company workers, but anyone with a weak liver tends to place orders with us,” he said.

Oriental raisin drinks are growing in popularity in Korea after another company, Kwang Dong Pharmaceutical, introduced the first hit product in 2010. 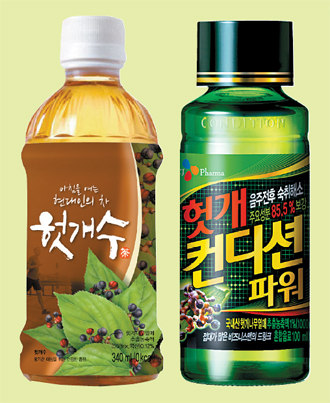 This saw the domestic market for such beverages boom from 4 billion won that year to 30 billion won ($25.4 million) 12 months later. There are now around 50 drinks in Korea made from the same extract that flaunt their properties as the antidote to a night’s boozing.

The market exploded quickly in Korea’s green-tea-friendly and heavy-drinking culture as Kwang Dong promoted the product as “a tea for men.” It used only male models in its commercials and, last year, added the Chinese character for “man” to its packaging.

Experts say the company succeeded by riding the coattails of a social trend that is seeing men pay more attention to their diets, dress and health.

“The trend came just at the right time [for Kwang Dong], as men have begun splashing out on products that are good for their health,” said Oh Se-jo, a professor at Seoul’s Yonsei University.

Winter is considered the off-season for the local beverage market, but Oriental raisin drinks bucked the trend as companies went on traditional drinking binges at year-end parties.

Lotte Mart said it saw a 20 percent increase in sales in December from July, while its total sales of beverages dropped 23 percent over the same period. 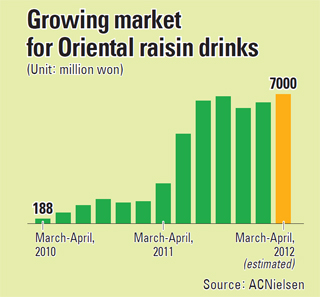 But the popularity of the hangover-killer has had the side effect of grossly inflating the price of the berries from which it is made. This is partly because it takes three or four years for newly planted trees to produce fruit, and the trees were not planted in earnest until their lucrative potential became apparent some 18 months ago. As such, domestic supply is expected to fall short of demand until 2014.

Despite the price discrepancy, drinks made from both domestic and foreign berries both retail in the same range of 1,200 won to 1,800 won a bottle.
By Kim Ho-joung, Wi Moon-hee[summerlee@joongang.co.kr]