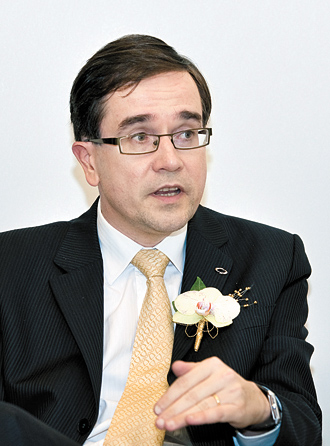 Renault Samsung CEO Francois Provost said the carmaker will produce more of its engines locally in Busan. Provided by the company

BUSAN - Renault Samsung Motors intends to increase the localization of its engines to help revitalize the company after recent operating losses, CEO Francois Provost told the Korea JoongAng Daily while at the Busan International Motor Show this week.

“We will start producing engines for SM3 in the summer in Busan, and for the QM5 in a couple of months,” Provost said on Thursday. “Engines for the SM5 are already being produced in Busan.”

The country’s fourth-largest automaker by sales has suffered from high cost as it depended on its Japanese operations for more than half of its engines as well as all of its transmissions and many other components. With the Japanese currency yen sailing high, this has caused it to post huge exchange losses in recent years, which resulted in a net loss of 292.1 billion won ($246.3 million) in 2011.

It is now trying to localize components and engine production to slash costs.

“What I can tell you is that more than 80 percent of our cars produced for the domestic market will be equipped with engines made in Busan,” said Provost.

He also discussed raising the percentage of the brand’s components outsourced from Korea, after earlier saying this would be raised to 80 percent by 2013.

“Fortunately, Korean automotive suppliers are competitive. We are very positive about achieving 80 percent,” he said.

But he refused to comment on whether the company would also buy transmissions from local manufacturers.

Renault Samsung has been suffering from high costs and rapidly declining sales due to the sagging popularity of its lineup. Its domestic sales through April this year plunged 37.5 percent from the same period in 2011, while exports sank 27 percent over the same period.

Provost would not be drawn on new developments or scheduled launches of new vehicles, even though new models are seen as the key to the carmaker’s survival in the domestic market.

On Renault’s Capture concept car, which is being displayed at the motor show, he said it will help reduce development costs for new models later on.

For its SM5 and SM3 sedans, Renault Samsung adopted Renault platforms but develop everything else itself. In a change of direction, Provost said Renault Samsung would rely more on its parent company’s R&D in the future.

“We will adapt a car from Renault to suit the Korean market and sell it here,” he said. “We will utilize existing projects to speed up the launch of a new lineup.”

“We are quite small in Korea and we do not have to pay for all the local investment. We have the full support of Renault,” he added.

On whether he expected to turn a profit this year, Provost gave a positive but ultimately noncommittal answer. “Our track record has already improved tremendously in just five months.”

Provost joined Renault S.A. in 2002 and was the CEO of Renault Russia for more than a year before stepping into his current position last year.
By Limb Jae-un [jbiz91@joongang.co.kr]