Volvo’s XC90 R-Design in twilight bronze, a new color for 2012 that extends the palette to six. Provided by the company


Far from Seoul’s Avante and Sonata-clogged streets, the road to Seoraksan near Seokcho in Gangwon is a different beast altogether: a meandering concrete catwalk for SUVs masquerading as a simple conduit to the east coast.

The roads are paved with hulking, homogenous shades of black, white and silver, making the sophisticated tone of my twilight bronze-colored XC90 R-Design, a luxury crossover SUV, a welcome addition to Volvo’s color scheme this year.

Huge on comfort, the latest upgrade of the Swedish carmaker’s trend-setting SUV lends the brand some much-needed auto-chic, while also lulling you into a well-grounded sense of security with its arsenal of segment-leading safety features. But more on that later.

A statuesque seven-seater (it measures 1,745 millimeters, or 68.7 inches, in height), the R-Design belies the Swedish carmaker’s unthreatening-but-approachable image, and is more Tyra Banks than Naomi Campbell.

The specially-tuned sport chassis, brushed aluminum trim and custom wheel design offer a touch of class, stability and meaty charm, while the engine doesn’t whine, respond lazily or get hysterical as it cruises from 0-100 kilometers in 10.3 seconds.

After four breezy hours ensconced in its stitched-leather power driver’s seat, replete with eight-way programmable memory adjustment, I emerged as if from a five-star spa. Like Shanghai’s mag-lev train, even at full barrel you feel as steady as when parked. Of course, therein lies the kick: Drivers who like to feel the road under their feet may get frustrated by the car’s opiate-like effect on the senses. But, perhaps, that’s the price you pay for this level of comfort. 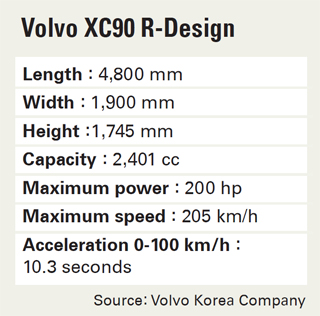 The 200 horsepower, inline-5 2.4-liter turbo-diesel engine rarely feels short of breath, even with torque maxing out at 42.8 kg-m, but it’s still a shadow of the older 3.2-liter Yamaha-made turbopetrol or V8 (Korean tastes have favored economical diesels in recent years as skyrocketing levels of inflation hit the pumps). For fuel efficiency, I averaged 11.3 kilometers per liter. The official spec claims 11.6.

On the down side, the sat-nav screen, which sprouts up electronically from the top of the dashboard, is next to useless on sunny days due to the angle and haze, and the ergonomics are uncluttered to the point of being a little uninspiring. The DMB and USB port was appreciated.

One drawback is that the third-row seating is chronically stingy on space. There is also a question mark over how large Korean families will fill all the seats and find space in the trunk for enough samgyeopsal and soju to last the weekend, but presumably the tents and Angry Birds sleeping bags could be stacked on the roof brackets.

As if by way of apology, all passenger seats fold down to create a flat internal bay for lugging home that LG Tromm Styler or oversized kimchi fridge.

But at the end of the day, this is a family car that many Koreans will use for weekends camping trips, and safety is paramount. On this front, the XC90 comes into its own. Its BLIS function is a godsend, providing flashing alerts as cars zoom into your blind spots courtesy of cameras that monitor an area 10 feet by 31 feet on either side of the vehicle.

In a similar vein, the rear parking assist camera was a lifesaver in the packed parking lot that leads to Seoraksan’s Ulsan Bawi hiking route - both for me, several packed SUVs and a pair of squabbling toddlers oblivious to the solar eclipse fast-approaching them.

Dynamic Stability and Traction Control (DSTC) helps measure the vehicle’s roll rate to pre-empt skids. Add to this a phalanx of acronyms including IC, WHIPS, SIPS and ROPS - or inflatable side and rear curtain air bags, whiplash, side impact and roll-over protection systems - and the XC90 is hard to beat for safety in its segment.

In a similar price band, BMW’s X5 and the Infiniti FX are sportier, while the Ford Flex offers a funkier facade - although too boxy for my liking - while also hitting aces for safety and delivering a more animated ride.