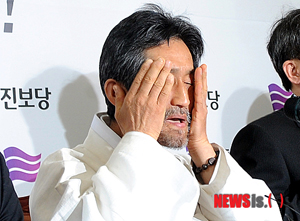 The official interim leadership of the minor opposition Unified Progressive Party decided yesterday to start legal proceedings to expel four proportional representatives, including two pro-North Korea members Lee Seok-gi and Kim Jae-yeon who have won the Assembly seats, after failing to persuade them to voluntarily resign from the posts.

Expelling the four, however, won’t be easy because the party’s internal rules require the leadership to first receive approval from the regional chapter to which each member belongs.

Being aware of this, lawmakers-elect Lee and Kim moved their memberships from the party’s Seoul regional chapter to the Gyeonggi chapter where there are many members from the party’s largest faction, the so-called Gyeonggi Dongbu Alliance, to which they belong.

Also, even if lawmakers-elect Lee and Kim are expelled from the party, they’re able to keep their seats in the National Assembly as independents as per current law.

“We decided to take legal action against the four proportional representative candidates - Lee, Kim, Cho Yoon-sook, and Hwang Seon - by raising the issue to the party’s disciplinary committee to expel them,” said Lee Jeong-mi, spokeswoman for the emergency council. The disciplinary committee is in charge of punishing party members.

“For the past 15 days, the emergency council earnestly requested them to voluntarily forfeit the positions, but there was no response at all and emergency council members agreed that there is only one decision to make,” said Kang Ki-kab, the interim head of the emergency council yesterday. While four rejected the ultimatum, 10 out of the 14 have tendered their resignations. The deadline had been extended once from Monday to yesterday.

Immediately after the decision, Lee Seok-gi, who has been insistent on keeping his position, released a statement yesterday expressing regret. “I express deep regret and pity for the interim leadership’s decision,” Lee said. “It is the worst decision made and it will eventually drive the party to break up.” He urged the leadership to withdraw its decision.

Lee Sang-kyu, a hard-line UPP member who was elected from Gwanak B District of Seoul, appeared on a radio show in the morning and said, “If the interim leadership makes a wrong decision, [the four] representatives involved will also take legal measures to nullify the expulsions.”
By Lee Eun-joo [angie@joongang.co.kr]