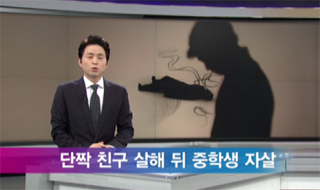 BUSAN - A middle school boy strangled a boy in his class he fancied and jumped from the rooftop of an apartment building, police said.

The Sasang Police Precinct in Busan said yesterday that the corpse of a 16-year-old middle school boy surnamed Kim was found by a resident near the entrance of an apartment building in Sansang District in Busan at 11:41 p.m. Thursday.

The police later found another corpse, who was identified as Kim’s 16-year-old classmate, surnamed Min, near the building. The police assume that Kim jumped from the roof of the 25-story building after strangling Min with a string.

“The boy [Kim] was sitting on the other boy’s upper body,” a 36-year-old witness surnamed Yeom, a neighbor, told the police. “I asked him what happened, but the boy shouted ‘I didn’t do it!’ and ran.”

The police found the string used to strangle Min and a receipt for it in Kim’s pocket. It was bought at a nearby supermarket at 8 p.m. on the day of the deaths.

“Kim took a picture of the string and sent it to his friends through Kakao Talk,” a spokesman of the police told the JoongAng Ilbo.

Police said teachers and classmates testified that Kim was attracted to Min since March, asking him to play computer games at a PC bang several times, but Min completely ignored him.

“The boy has been stalking my son,” Min’s father told the JoongAng Ilbo. “He was waiting for my son at hagwons [cram schools] and also came to our house although my son didn’t like it. My son wasn’t able to get rid of him because Kim is stronger.”