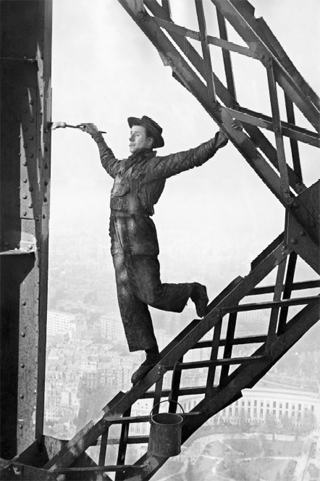 The 1953 photograph “Eiffel Tower Painter” by Marc Riboud is a representative work of his solo show of the same title running until Aug. 5 at the Seoul Arts Center in southern Seoul. Provided by the organizers

Though French photojournalist Marc Riboud has been somewhat of a nomad in the East and is renowned for his work in China behind the Bamboo Curtain in the mid-20th century, he and the Korean Peninsula have been nearly strangers to each other.

The 89-year-old Magnum photographer has never taken photos in Korea and his solo exhibits had never been held in this country. But this changed when his retrospective was put on display at the Hangaram Design Museum of the Seoul Arts Center over the weekend.

Riboud was still unable to come to Korea due to health problems, officials at art consulting company Covana Contents, the organizer of the retrospective, said.

“He said, ‘Finally,’ when we told him the plan to hold his retrospective in Korea and expressed regret that he cannot come here,” said Steven Kim, executive managing director of the company. 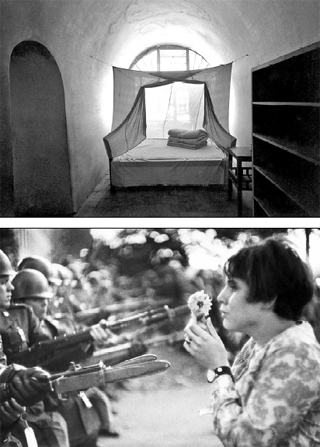 The 1965 photo “Mao’s Bedroom,” top, and “Girl with a Flower,” bottom, are part of the solo show of French photographer Marc Riboud. Provided by the organizers

His retrospective, titled “Eiffel Tower Painter,” started on Saturday and features 190 original photographs. “He is one of the last survivors of the first generation of modern photography and until this very day, Riboud has never stopped challenging himself,” Kim said. “The photographer, who exudes lyricism and a deep sense of realism, speaks directly to the viewer’s heart.”

This is certainly visible in some of Riboud’s major works like “Eiffel Tower Painter.” The series of photos portray the poor working conditions of a laborer who paints the famous tower without safety devices. Still, the painter moves with a natural elegance just like a dancer and makes for a very lyrical scene.

The exhibition is divided into six sections. It starts with “Eiffel Tower Painter,” which consists of a continuous series of dotted photographs of the painter, all taken on the same day and with a single roll of film.

The second section, “China & Japan in ’50s,” shows his photos of life under the rule of Mao Zedong’s closed society, as one of the first-ever European photographers to enter China during the days of the Bamboo Curtain. The photos in this section also deal with Japan’s economic renaissance, which so rapidly changed the country.

The third part, “From Paris with Love,” shows romantic and lyrical photos taken in the city. And the fourth section, “Women’s Beauty in Nature,” portrays the natural beauty of women in various parts of the world.

The fifth section is “Witness of the Times” and shows shots of some of the world’s leaders including Winston Churchill, Mao Zedong, Ho Chi Minh and the Dalai Lama as well as world-renowned artists like Pablo Picasso, Audrey Hepburn and the Beatles.

The sixth section, “As the World Turns,” includes the famous antiwar photo dubbed “Girl with a Flower.”