Epani had private wedding in Cebu

Epani had private wedding in Cebu 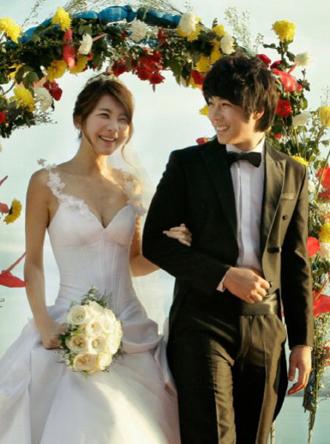 Actress Epani revealed on Friday that she and musical actor Seo Sung-min held a private wedding back in April in the Philippines.

“We got married last April at a resort in Cebu in the Philippines. To the fans, I’m so sorry that I’ve only revealed it now, but we wanted a quiet ceremony with just our close friends and family members there,” said Epani on her Cyworld page. The actress also posted photos from the event.

“It was a beautiful ceremony and we promise to live happily ever after,” the entertainer wrote.

Seo proposed to the actress back in January during the curtain call for the musical “Let’s Go to the Rose Inn,” which she starred in.

“As a bee is drawn to honey, I am naturally drawn to you. I promise to love you and then love you some more,” musical actor Seo Sung-min said as he got down on one knee.

Seo presented his lover with a three-carat diamond ring thought to be worth around 350 million won ($310,700) in front of the audience.