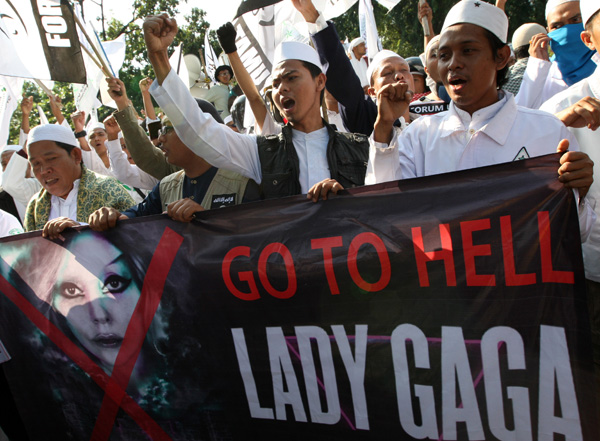 JAKARTA, Indonesia - Pop diva Lady Gaga’s show in Indonesia has been canceled, with the promoters saying the security threat was too serious after Islamic hard-liners threatened “chaos” if she entered the Muslim nation.

“Lady Gaga’s management has considered the situation minute to minute, and with threats if the concert goes ahead, Lady Gaga’s side is calling off the concert,” Minola Sebayang, lawyer for promoters Big Daddy, told reporters on Sunday.

“This is not only about Lady Gaga’s security, but extends to those who will be watching her,” he added.

Earlier this month Jakarta police refused approval for the show after the hard-line Islamic Defenders Front threatened violence if Lady Gaga performed, calling her a “devil’s messenger” who wears only a “bra and panties” on stage.

The promoters had indicated that a deal was being hammered out to tone down the star’s stage act, but her own management vowed no compromise to appease religious conservatives or censors.

Michael Rusli, Big Daddy president-director, said it was unfortunate that the show, scheduled for June 3 in Jakarta, had to be called off.

“For the past few days we have communicated with the government and Lady Gaga’s side. The government has given support, but this is not about the permit,” he said. “The cancelation is really due to concerns over security.”

More than 50,000 tickets had been sold for the event, part of the singer’s “Born This Way Ball” tour, and Rusli said Big Daddy had been unable to find an alternative venue. “This is a huge concert so it can’t be moved elsewhere. Nowhere else in Indonesia can accommodate that many people,” he said.

He insisted that the 26-year-old U.S. singer was “prepared to adapt to Asian culture.”

But Troy Carter, the star’s manager, said in Singapore on Thursday that Lady Gaga, who has faced protests from Christian groups at her shows in the Philippines and Korea, would not tone down any of her concerts.