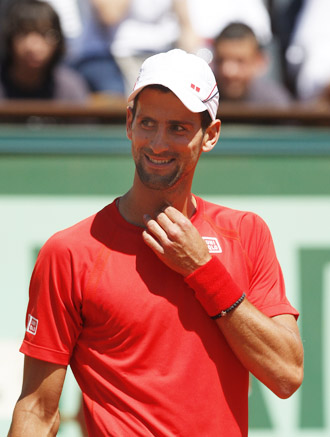 PARIS - As daylight disappeared and wind whipped loose dirt around the court, Novak Djokovic watched one last ace fly off Roger Federer’s racket and end their thrill-a-minute semifinal at the 2011 French Open.

It’s been nearly a year since that evening, and Djokovic hasn’t lost a Grand Slam match since.

He’s won 21 in a row, earning championships at Wimbledon in July, the U.S. Open in September and the Australian Open in January. If Djokovic can prolong that run on the red clay of Roland Garros over the next two weeks, he will become the first man since Rod Laver in 1969 to win four consecutive major tennis tournaments.

A remarkable achievement, to be sure. And one the 25-year-old Serb is trying not to expend too much energy pondering ahead of the French Open, which started yesterday.

“It would definitely mean the world to me .?.?. but I haven’t thought about that too much, because I do not want to put too much pressure on myself,’’ the No. 1-ranked Djokovic said, then added with a laugh: “Pressure that I don’t need at this moment, because I already have enough.’’

He insists he wants to view this tournament the way he would any year.

“The hard part is [the] same for everyone: Every point you play, every game you play, the pressure you face and just answering the questions time and time again,’’ said Federer, who twice fell one match shy of four Grand Slam titles in a row, losing in the French Open final to Rafael Nadal in 2006 and 2007.

“It’s fun, because you’re talking about the highest of accomplishments,’’ Federer continued. “But at the end of the day, you just like to play the matches and not talk about it that much.’’

Nadal also went on a three-major winning streak - at the French Open, Wimbledon and U.S. Open in 2010 - but fell short of No. 4, losing in last year’s Australian Open quarterfinals while hampered by a left leg muscle injury.

He dismissed the notion that he came close to equaling Laver, noting that he was three matches away, and said his happiness quotient today doesn’t depend on whether or not things went well in Melbourne 16 months ago.

“Life continues,’’ Nadal said, “and you keep working hard to try to be fit and be competitive for the next [match].’’

There’s another way in which Nadal and Federer were far from matching Laver - as Djokovic would be, even if he wins his next seven matches: Rocket Rod pulled off his Grand Slams within a calendar year (the Australian left-hander also did it in 1962; Don Budge is the only other man to go four for four).

Laver himself firmly believes there’s a distinction to be made.

“People will say, ‘He’s going for a Grand Slam.’ And I say, ‘No, he’s not doing that.’ That wasn’t the way this whole thing was set up,’’ Laver explained last year. “It starts in January and ends in September; starts with the Australian Open and ends with the U.S. Open.’’

None of the top three men was in action in Paris on the first day. Djokovic and No. 3 Federer will be on court today, while No. 2 Nadal is slated to begin his attempt for a record-breaking seventh French Open title tomorrow.

“He is always the favorite for this tournament. He even was last year,’’ Djokovic said.

Chung Mong-gyu returns as head of KFA for third term