Foreign operators line up to take notes on LTE

Foreign operators line up to take notes on LTE 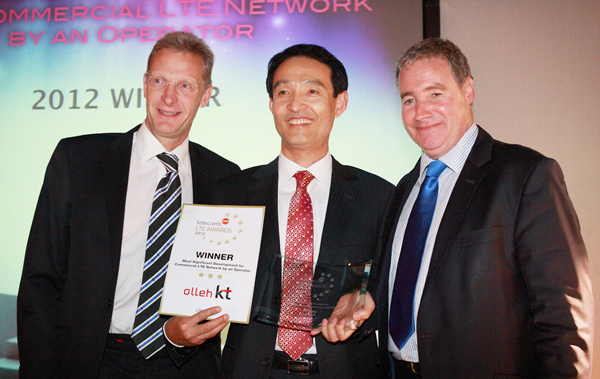 Korea’s next-generation LTE technology has been gathering worldwide attention lately, with KT picking up a key award at an LTE World Summit held in Barcelona on Thursday. Provided by the company


Foreign mobile operators are turning their eyes to their Korean counterparts and expressing awe at the country’s fast-developing fourth-generation Long Term Evolution (LTE) infrastructure and related contents, which stems from fierce competition in the local market.

“Korean telecom firms, especially LG U+, are leading the global standard for LTE, and others need to follow this,” Lee told Rajeev Suri, chairman of the equipment provider, early this year.

KDDI, a Japanese mobile operator, has asked for advice from LG U+ several times.

Nadir Mohamed, CEO of Canada’s top mobile carrier Rogers Communications, visited the Seoul headquarters of SKT early this month to take notes from the Korean company on establishing an LTE network. “During our demonstration of how to download a file on the LTE network, Rodgers officials [were clearly impressed],” an SKT official said.

Runner-up KT started providing the LTE service as the last player in the market, but it won an award for having the best LTE network at the LTE World Summit 2012 held in Barcelona, Spain, on Thursday. KT’s LTE data-processing technology, known as Warp, received credit for consuming less power and providing stable data transmission in the event of torrential rains or blackouts.

Foreign mobile industry officials are increasingly visiting KT’s Innovation Center in Seocho-dong, southern Seoul, where KT showcases its Warp technology. Venezuela’s Science Minister Manuel Fernandez and his officials were among those who turned up recently to take a look.

The Korean LTE providers attribute their success in operating the new mobile network service to their high-quality content.

“SKT plans to launch mobile games that can be played on the LTE network in collaboration with game makers like Nexon, Neowiz and NHN next month,” an official at the company said.

LTE phone users will be able to enjoy games like KartRider and Blue Moon on their phones from next month.

“In line with the growing number of LTE subscribers, SKT plans to develop various calling plans tailored to different groups of users in order to help them reduce the burden of mobile bills and contribute to increasing the number of LTE users,” said Jang Dong-hyun, head of the company’s marketing division.

The number of mobile phone users under subscription to the LTE service in Korea stood at 3.5 million as of March, accounting for 20 percent of the global total of 17.2 million.