‘KartRider’ hitmaker streets ahead in SCR

‘KartRider’ hitmaker streets ahead in SCR 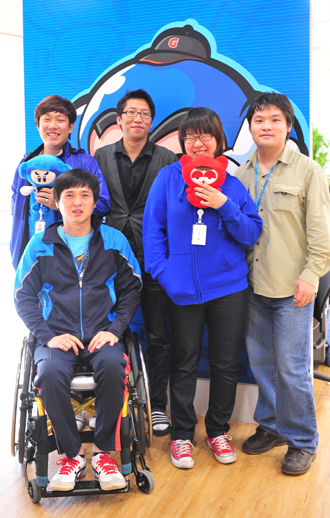 Employees with disabilities and their colleagues at Nexon Communications smile for the camera. Provided by the company

BUSAN - Brain lesions often cause Lee Se-hui to mumble when she speaks and stagger when she walks, but this didn’t stop Nexon Communications from giving her a job in February as it bids to fulfill its social corporate responsibility (SCR).

The 27-year-old, who completed internships at the Korea Trade-Investment Promotion Agency and several SMEs, will become a permanent employee at Korea’s largest online gaming company in November barring any major bungles.

“I’m so delighted at the prospect of finally securing a steady job,” said Lee, who lost faith after being ignored by countless interviewers due to her disability. “I’m hungry to take more responsibility and play a bigger role [at the company].”

Nexon, the company behind the hit online racing game KartRider, established the affiliate in October. Now 67.5 percent of its workforce is composed of people with disabilities who are tasked with deleting and blocking abusive and lewd messages posted on online game bulletin boards. Of its 40 employees, 27 have a disability, and in the vast majority of cases, the disability is classed as “severe.”

They are on the same pay scale and notch the same level of productivity as employees at Nexon’s other affiliate, Nexon Networks.

Nexon Communications, which has targeted sales of 2.5 billion won ($ 2.1 million) this year, was set up to reflect the management philosophy of Nexon founder Kim Jung-ju. He saw welfare as a way of helping people to stand on their own two feet, rather than only giving them handouts.

“We aim to show that people with disabilities are fully capable of working in the intellectual services and IT sectors,” said Kim Jong-hyun, an official at NXC, Nexon’s holding company.

At Nexon’s Busan office, barrier-free renovations mean all of the doors open and close automatically and handrails are a common sight. Showers and bathrooms have also been installed to provide more creature comforts.

“It cost us two or even three times the normal price to furnish the office, but our main focus was to provide an environment where our staff can show off their talent to the fullest,” said Lee Kyeong-jun, an official at Nexon Communications.

The company has been officially accredited by the Busan Metropolitan Government as a special subsidiary for employing people with disabilities.

To get accreditation, Korean labor law requires a company to register 10 or more people with disabilities, representing at least 30 percent of its total workforce. Half of those with physical or mental handicaps must be classed as severely disabled.

Nexon also provides accident insurance for its employees and their parents or guardians that even covers accidents that occur while they commute to work.

Kwon Dong-min, a 23-year old employee who lost his right arm while in high school, said he has learned new skills and can now type 300 Korean words per minute. Shin Dong-ji, 31, who is paralyzed from the waist down, said he can save 800,000 won a month on his new salary. And Kim Hyung, 28, said he is thrilled at having both a wife and a job despite his mental disability.

However, all three admitted they feel frustrated with their job at times as it entails dealing with lewd and abusive language in posts by angry game users.

“But at least I’m still communicating with the world,” Shin said.