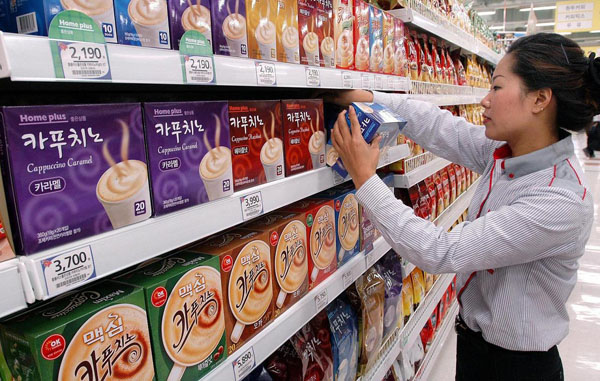 The above photo shows a worker at a Homeplus outlet in Seoul arranging boxes of the discount chain’s private-label cappuccino. Provided by the company


The term “private labels” is used to refer to goods that sacrificed both quality and price compared to higher-priced national brands that are sold under the brand name of big manufacturers.

These days, however, consumers are purchasing more private labels than ever, and not just because of the low prices.

Local retailers have enhanced the quality of private-label products to bring them in line with that of national brands, but have managed to keep prices 30 percent cheaper on average.

“Just several years ago, I felt that I was making a sacrifice whenever I bought a store brand instead of a national brand,” said Jeong Mi-su, a 29-year-old cook, who was shopping at a Homeplus store in Jamsil, southern Seoul, on Thursday. “Now I notice there’s little difference in quality between the two. And if the quality is the same, why would I pay for more expensive national brands and their advertising costs?” Jeong is one of an army of consumers that have boosted the sales of private label products sold at discount chain stores.

To tap consumers like Jeong, Lotte Mart said it will increase the number of such products to 10,500 by the end of this year, up from 10,000 at present.

“Our private-label products range from milk and ready-to-cook haemultang [Korean spicy seafood soup] to dog diapers and toothbrushes,” said Lee Chang-kyun, a spokesman for Lotte Mart. “Our store brands control 25 percent of sales, but we aim to raise that figure to 30 percent.”

E-Mart, which sells 15,000 items under its own brand names, said its private labels alone raised 3.4 trillion won ($2.8 billion) in revenue last year, or one quarter of the total. In 2006, the retailer reaped 450 billion won from selling its own products.

Homeplus has an advantage in terms of growth in this area. It sells 13,000 items under its store brand names, and these account for 26.5 percent of entire sales.

“Store’s own products are around 30 percent cheaper than national brands, because retailers do not need to spend as much money on advertising and marketing, and they’re selling hot during tough economic times,” said Koo Do-yeon, a spokesman for Homeplus. “Consumers are choosing to abandon expensive brands and opt for store’s private labels because there is little difference in quality. Some of our store-brand items are actually produced by manufacturers that supply the same goods for bigger companies.”

Homeplus sells its own wine brand in collaboration with British wine expert Jancis Robinson. Bottles sell at up to half the price of competing brands.

In Korea, private labels first hit the scene in 1996 when E-Mart introduced its E-plus milk. Homeplus and Lotte Mart jumped into the fray in 2001 and 2003, respectively.

Most of these pioneers were no threat to national brands, but now the gap has shrunk and discount chains are increasingly migrating customers over to their own products as they invest heavily to ramp up quality. The chains often divide their own products into three categories: Premium, standard and economy.

And while the bulk of private-product sales used to be centered on food, the balance is now shifting.

In the first quarter, 58.1 percent of sales of Save L, Lotte Mart’s cheapest store brand, came from non-food items, up from 28.5 percent last year.

Market observers said the growth of private labels comes as a shot in the arm for SMEs who have previously struggled to compete with larger companies.

“Discount chains should take the lead in bringing overall commodity prices down by rolling out a variety of private labels,” said Jang Min-jin, a spokeswoman for E-Mart. “This would benefit consumers and small manufacturers alike.”

Other market observers said it is important for retailers to keep innovating with new products to cater to fast-changing consumption trends.

“The real question is, if inflation on food prices declines and at the same time the economy improves, will consumers return to the name brands they know and trust?” asked Darren Seifer, an analyst at U.S.-based research firm NPD.

“[They may well do] if retailers don’t respond to declining satisfaction, and if name brand manufacturers continue to aggressively build loyalty. On the flip side, name brands need to be aware that private-label usage continues to increase and the quality perception is improving.”