DUP primary heats up as votes are in for 7 races

DUP primary heats up as votes are in for 7 races 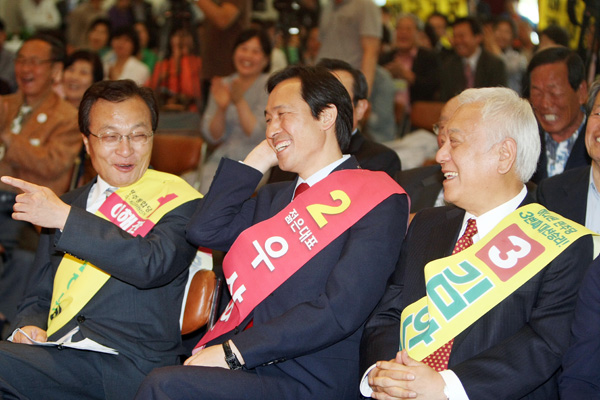 Lee Hae-chan, left, and Kim Han-gill, right, two of the favored candidates in the leadership election of the Democratic United Party, the country’s largest opposition party, share a laugh during the primary in Jeju yesterday. At the center is candidate Woo Sang-ho. [YONHAP]


The Democratic United Party’s nationwide primary to elect its new chairman and Supreme Council members has reached its midpoint, but the seesaw race between two frontrunners has gotten tighter than ever as elections wrapped up in seven cities and provinces yesterday.

The largest opposition party began the race on May 20 with a primary in Ulsan to elect its new chairman and leadership members. Eight candidates are running in the 13 primaries around the country, and the final outcome will be announced on June 9 at the convention in Seoul. 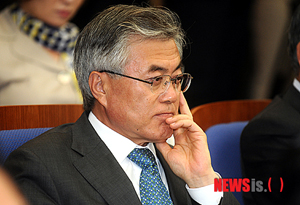 As of yesterday, Lee Hae-chan, former prime minister of the Roh government, headed the race, winning 1,597 votes in total from seven primaries. Kim Han-gill, a novelist-turned-politician, followed closely in second place with 1,516 votes.

Yesterday’s primary in Jeju was the seventh of the series. Although Kim scored a victory yesterday, he was still behind Lee in total votes in the back-and-forth match.

Expectations were high, when the primaries first began, that Lee would easily lead the race to become the new DUP chairman.

The two largest factions in the DUP have reached a deal on splitting leadership positions so that Lee would serve as chairman, while Park Jie-won, former chief of staff of the Kim Dae-jung Blue House, would work as the floor leader.

As planned, Park was elected as the floor leader on May 4 with the backing of the Roh faction, but Lee’s race appeared to be harder than expected.

When the nationwide primary kicked off in Ulsan, Kim scored a surprise victory, winning 103 votes, while Lee only won 48 votes to finish in fourth.

The next day, the party took the primary to Busan, the stronghold of the Roh loyalists, and Lee won the race by winning 353 votes, while Kim took in 204. Lee also managed to lead the primaries with accumulated votes of 401 while Kim came in second with 307.

In the Gwangju-South Jeolla race, Kang Gi-jung scored a surprise victory, but Lee was still the frontrunner as he won 772 votes in total, while Kim trailed him with 744 votes.

In the next race in Daegu-North Gyeongsang, Kim scored another victory and managed to beat Lee in total votes. On the next day, however, Lee won a landslide victory in his hometown. After the Daejeon-South Chungcheong primary, he scored 1,398 votes in total, 205 votes more than Kim.

Another crucial race took place in South Gyeongsang on Saturday, where Lee was expected to win again. However, Kim won 258 votes, while Lee only scored 150. The race was seen as particularly important as two presidential contenders for the DUP were each backing Kim and Lee.