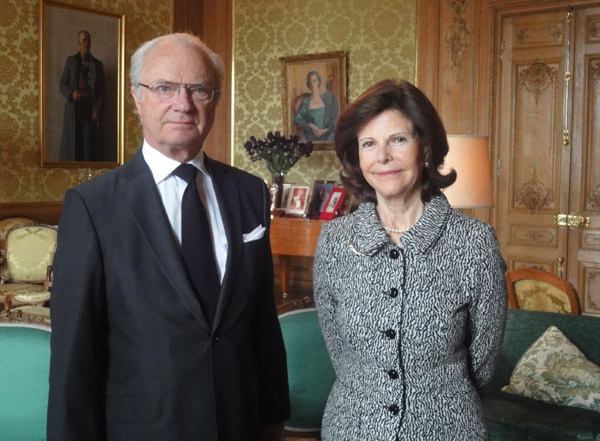 King Carl XVI Gustaf and Queen Silvia of Sweden in their royal palace in Stockholm on May 16, two weeks ahead of a four-day state visit to Korea from tomorrow. By Yoo Ji-hye


STOCKHOLM - King Carl XVI Gustaf and Queen Silvia of Sweden will arrive in Korea tomorrow for a four-day state visit to Korea on the invitation of President Lee Myung-bak to reciprocate his visit to Sweden in 2009.

The royal couple’s trip includes a visit to the Yeosu Expo to coincide with their national day, a trip to Panmunjom, economic forums and the launching of a week-long Swedish Film Festival to be held in honor of their visit, which begins Wednesday.

In advance of the royal visit, a JoongAng Ilbo reporter met with the King and Queen in the Royal Palace in Stockholm on May 16.

The king has visited Korea five times before, although this trip will be the first state visit. He uses a Samsung cellphone and owns an LG LCD TV.

The king said his grandfather, King Gustaf VI Adolf (1882-1973), told him as a child, “In the country of Korea, you can see many beautiful ancient artifacts and tombs.” The late king was interested in archeology and often told his grandson stories of his excavation expeditions in Asia. The then-Crown Prince Gustaf VI participated in the excavation of a Silla era golden crown at the Sobong Tomb in Gyeongju in 1926.

Diplomatic relations between the two nations were established in 1959.

King Carl XVI Gustaf has been on the throne since 1973. His father, Prince Gustaf Adolf, passed away when he was only nine months old.

The environmentally-conscious king drives an eco-friendly car - sometimes himself, though he has a chauffeur. He cites oil shortages, global warming and the need to find renewable fuel in the future as the reasons why he chose a car that runs on biogas.

“We have to look into the future,” he said. “We are at a tipping point, and we do have to do something about it. I want to be part of it, at least give my part to this future of energy.”

The queen said, “I must say his majesty is very strict with me about the household so he’s always behind me.” She said the king asks questions like, “ ‘Are you really separating the waste? The glass and plastic and other items like batteries?’”

The king also spoke about the social welfare system in Sweden, which he said “has been developed over a very long period of time” and was “made possible with the cooperation of the community.” But he said no matter how well the system works in one country, each country’s culture is different and different systems are needed.

“And one important part, I think, is that we are not involved in politics. We are objective, which means that I can talk to anybody and anybody.”

He said he is friendly with President Lee Myung-bak. “We believe we would have interesting discussions about mutual interests.” This Wednesday, the king will hold talks with Lee at the Blue House on economics, science, green growth and cultural exchange.