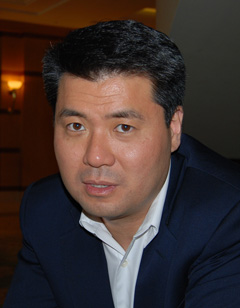 Jun Choi, the former mayor of Edison, New Jersey, returned to the country of his ancestors last week at the invitation of the Overseas Koreans Foundation to share with young Koreans the passion that changed the life course of a one-time NASA-scientist-aspirant.

Choi earned his bachelor’s degree in engineering at MIT and then his master’s degree in public policy and administration at Columbia University.

During his stay in Korea, he met students including those at Yonsei University and Ewha Womans University in Seoul, and gave a lecture titled “Finding a Fulfilling Career and Meaningful Life in a Period of Global Economic Uncertainty.”

“It was really about life lessons, about young people finding their dreams and passions,” Choi, who was the first elected mayor of Korean descent in the continental U.S. in 2006, said during an interview with the Korea JoongAng Daily last week. “We are all good at something. We all have a way of contributing in a significant way.”

Overall, Choi said that the Korean students he met were dreaming big, which he said was a sign that Korean society is still healthy. He said Korea is still retaining its can-do spirit that helped it make an unprecedented mark on the global stage as a recipient-turned-donor of international aid.

More Korean-Americans are entering mainstream politics in the U.S., Choi said, but they still have a ways to go before they break through. “Politics is one of the last areas of development,” he said.

He said the majority of Koreans in the U.S. are still first- or second-generation, and that the environment for Koreans to become more involved in politics will be ripe for the coming generation.

Koreans’ insular, family-oriented life style is often misunderstood as being indifferent to integrating into the larger surrounding community, sometimes causing conflict with other minorities, such as the African-American community, he said.

“I always encourage more Koreans to participate more in community. Don’t be so insular, don’t always speak Korean in K-Town [Korean Town] and participate in groups with people of all backgrounds, including African-Americans,” he said. “Koreans have to do that going forward.”