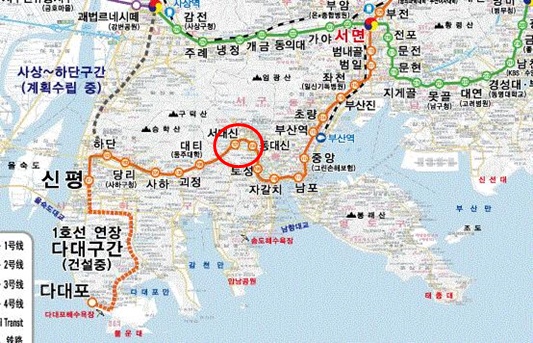 A man in his 30s died from jumping in front of a moving subway train yesterday after fighting with his wife.

The Busan Transportation Corporation, which manages the Busan subway line No.1, said yesterday that a 30-year-old man surnamed Park jumped off a platform at Seodaesin Station at 3:24 p.m. on Saturday in front of an approaching train. Park died instantly.

“We assume that the man killed himself in a fit of anger after arguing with his wife,” a spokesman for the Busan Transportation Corporation said.

“We’re still trying to find out the motive of the suicide by cooperating with the police.”

CCTV footage showed the couple arguing with each other before Park jumped with his wife and 5-year-old daughter watching.

The line was temporarily halted to clear the track. It began operating again at 3:48 p.m.

The Seodaesin Police Precinct in Busan said that Park had recently been suffering from financial hardship due to his personal business going bankrupt. The family was on its way to seek help from his acquaintances when he jumped.