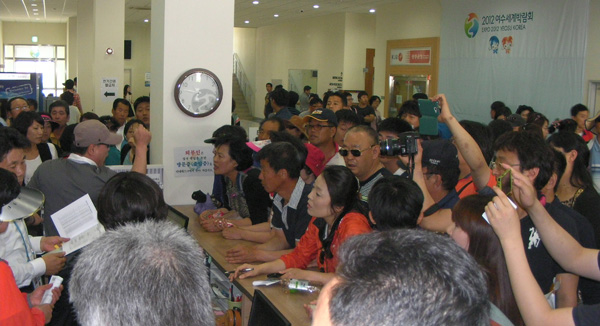 Visitors at the Yeosu Expo demand a refund at the reception desk of the organizing committee for the 2012 Expo Yeosu Korea next to the expo site in the southern port city, yesterday. [NEWSIS]


YEOSU, North Jeolla - The Yeosu Expo’s ticket reservation system, which was ambitiously introduced for the first time for an international-level exposition, was scrapped on only the 16th day of the event after facing an onslaught of complaints from visitors that traveled here only to find the pavilion they came to see was sold out.

“I just wasted my day,” an angry spectator surnamed Koo, 30, who came from Incheon, told the JoongAng Ilbo. “I’ve been waiting in line for a long time since very early morning because the staff of the expo told me that I would get the tickets at the site. I don’t even want to see any other exhibitions.”

The advanced ticket reservation system was available for eight exhibit halls that were predicted to attract the most spectators among a total of 80 exhibit halls. 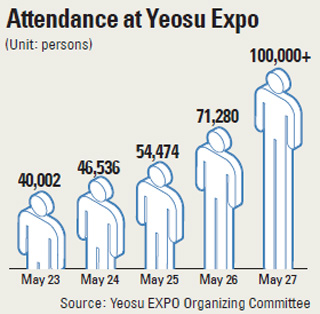 Organizers sold 30 percent of the tickets through the official Web site of the Yeosu Expo and a smartphone application, which allowed people to purchase a ticket a month before they decided to view an exhibit, and sold the remaining 70 percent of tickets through 85 Media Kiosk machines at the expo site.

The machines, however, only sell day tickets from 8 a.m. every morning, dissatisfying many spectators who were not aware of the ticket reservation system and who want to purchase their tickets for the eight popular shows at the expo site just like their admission tickets.

“We decided to close our ticket reservation system at noon today as the number of complaints over the system has rapidly increased in the past week,” Cho Yong-hwan, the PR chief of the organizing committee, said during a press conference held yesterday.

“All of the tickets for the Yeosu Expo will be sold on a first-come, first-served basis. We sincerely apologize to people visiting the event for generating such confusion, but the decision was made to reduce more potential problems that might occur in the next three months.”

The committee closed the online reservation system available on the official Web site of the expo from noon.

Organizers had to deal with hundreds of angry people who failed to get their tickets for the eight popular exhibitions at the site. They flocked to the committee office and demanded refunds for their admission tickets as the tickets for the popular eight were sold out before 9 a.m.

The committee said later they will consider refunding ticket money.

“People who have previously purchased tickets will be able to use their tickets,” Bae Yeong-han, a spokesman for the organizing committee said. The committee said they anticipated receiving some complaints because the Yeosu Expo is the first international-level exposition to introduce the ticket reservation system, but never imagined that it would have gone this bad.

“Now we worry about getting complaints from spectators who like the reservation system because they are forced to stand in a long line, probably four to five hours under the scorching sun,” Bae said. “We provided the reservation system for many people to enjoy the expo in the limited area of the exhibition venue, but it eventually failed.”

More than 100,000 spectators visited yesterday as part of the three-day weekend for Buddha’s birthday, the highest attendance for a single day so far.