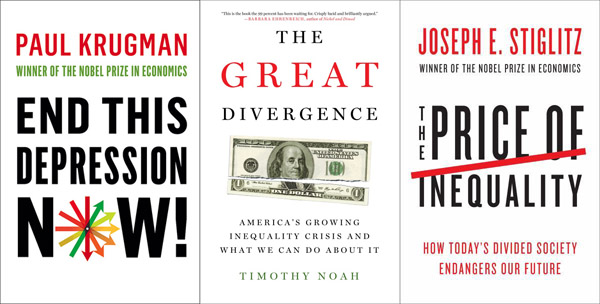 The U.S. publishing industry is seeing an “Occupy Bookstores” movement with at least 20 current and upcoming works reflecting concerns about economic conditions.


With a Democrat in the White House, a wave of books is coming out this year lamenting the slow economy and calling for change.

And those books are by liberals.

“It’s the story of the moment right now,” says Patricia Bostelman, vice president of marketing for Barnes & Noble Inc. “We have a real disparity-of-wealth issue, and that tends to be a subject for books from the left, especially after Occupy Wall Street [movement].”

Call it the Occupy Bookstores movement. At least 20 current and upcoming works reflect the left’s varied reactions - fatalism, disappointment, anger - to the Obama administration’s handling of the economy and concerns about corporate power (too high) and government spending and investment (too low).

“I published a bunch of liberal books during the [George W.] Bush administration and the theme was basically ‘I hate Bush,’?”? says Chris Jackson, executive editor of Spiegel & Grau, a Random House Inc. imprint. “This time, we’re dealing with the limitations of what a president can do and systematic things like the influence of the financial industry and the relationship between the 1 percent and the 99 percent.”

Timothy Noah’s “The Great Divergence” and Joseph Stiglitz’s “The Price of Inequality” are among several new books that focus on the growing gap between the rich and poor. Prescriptions for the economy are featured in a pair of best sellers: Paul Krugman’s “End This Depression Now!” and former Obama adviser Van Jones’ “Rebuild the Dream.”

Some books are campaign oriented this election year, like James Carville’s “It’s the Middle Class, Stupid,” while others offer information, inspiration and guidance for activists. “Days of Destruction, Days of Revolt,” co-authored by Chris Hedges and Joe Sacco and published by Nation Books, provides close accounts of some of the country’s most devastated communities, or “sacrifice zones.” It ends with a detailed history of the Occupy protests and a declaration that “the mighty can fall.”

“Nation Books has always issued books on inequality and class, but sometimes historic events enable some books to get a greater hearing than others,” says Carl Bromley, Nation Books’ editorial director. “It’s like what happened during the first half of the last decade. All kinds of books about the Middle East were getting published so the public could better understand what was happening in the news.”

“I think a goal for some of the books is to shape the debate and the presidential campaign,” says Drake McFeely, president of W.W. Norton & Company, which publishes Krugman and Stiglitz, both Nobel Prize-winning economists. “I think the feeling for some writers is that it would be nice if these books gave Obama the room to move more to the left than he has.”

Many books were inspired directly by the protests. Noam Chomsky’s “Occupy” was among a series of pamphlets released by Zuccotti Park Press, named for the Manhattan park where the Occupy protests emerged in September. “Occupying Wall Street” was published by Chicago-based Haymarket Books and credited to several authors collectively identified as “Writers for the 99 Percent.”

Other releases include “The Occupy Handbook,” with contributions from Krugman, Michael Lewis, Barbara Ehrenreich and others, and Richard Wolff’s “Occupy the Economy,” issued this month by the publishing arm of San Francisco’s City Lights Bookstore.

“We’ve really seen an upsurge for these kinds of books over the past,” says Paul Yamazaki, a buyer for City Lights. “And some of the older books have taken on a new life, like Saul Alinsky’s ‘Rules for Radicals.’?”

One longtime activist and founding Occupy organizer, David Graeber, already has written a word-of-mouth hit and has a deal with Spiegel & Grau for a book about the Occupy movement and the democratic process.

Graeber, credited with coining the Occupy phrase “We are the 99 percent,” last year released “Debt: the First Five Thousand Years” through the independent Melville House Publishing. The book was widely discussed and has sold around 60,000 copies.