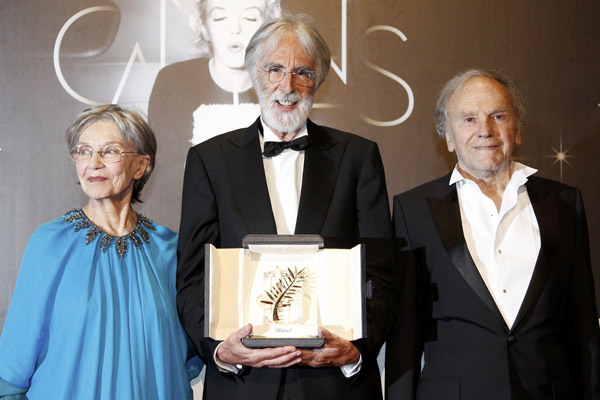 CANNES, France - There were no prizes for either of two Asian directors showcased, the Koreans Im Sang-Soo and Hong Sang-soo in Cannes.

Cannes crowned “Love” by Austria’s Michael Haneke, the wrenching tale of a man and his dying wife, with its Palme d’Or prize as Europe swept the awards at world cinema’s top showcase.

Haneke’s octogenarian actors, French screen icon Jean-Louis Trintignant, 81, and Emmanuelle Riva, 85, bowled Cannes over in the story of Georges and Anne, an adoring couple whose bond is tested after she suffers a stroke.

His second Palme in three years, the win confirmed Haneke’s status as arguably the most important film director working in Europe.

Haneke took the Palme d’Or three years ago for a very different work “The White Ribbon,” a black-and-white study of malice in a German village on the eve of World War I, which some saw as a parable on the roots of Nazi savagery.

Hailed as a masterpiece by critics, the French-language “Love” marked a journey into tender new territory for a director better known for exposing the icy secrets of the soul.

Haneke’s sober camera chronicles the intimate details of Anne’s physical and mental decline, as Georges fulfils a pledge to care for her at home until the end.

Both actors climbed on stage at the star-studded gala in the Riviera city to accept the award with Haneke, who dedicated it to his wife of 30 years.

“This film is an illustration of the promise we made to each other, if either one of us finds ourselves in the situation that is described in the film,” the 70-year-old director told the audience.