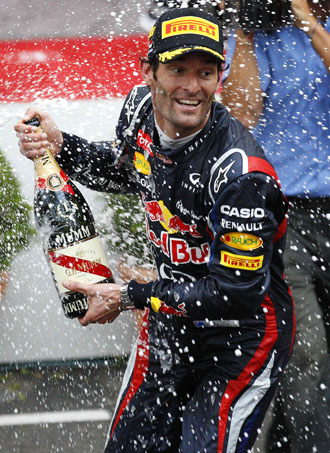 MONACO - If Mark Webber’s victory in the Monaco Grand Prix from pole position came as no surprise given the nature of the track, the Australian’s triumph on Sunday still made Formula One history and left the championship even more open after six races of a thrilling season.

For the first time ever in the sport, a sixth different driver has won each of the six opening races.

It’s some contrast to last season, when Sebastian Vettel was coasting to the title after winning five of the first six, and Red Bull was crushing Ferrari. That hardly captured the imagination of racing fans, but this season is turning out to be a golden one for F1.

“It’s interesting to see the constant surprises we’re having this season, you never know who’s going to be in pole and win the race,” said Fernando Alonso, who took the championship lead on Sunday as the Spaniard bids for his third title.

Vettel, the two-time defending F1 champion, is tied for second place with his teammate Webber, 3 points behind Alonso.

“The number of different winners is good for [the fans] but for us it’s very difficult to know what’s happening,” the German said. “It’s a long year, it will be crucial to keep scoring points.”

Despite not even winning a race, Lewis Hamilton is only 13 points behind Alonso and still a title contender. Even Nico Rosberg, who finished second on Sunday, is just 17 points back in fifth spot.

Hamilton could make up ground up if he wins in Canada in two weeks’ time.

“Who knows?” Hamilton said after finishing fifth on Sunday. “I’m still there. We are falling behind bit by bit, which is tough for us, but we’ll keep pushing and keep fighting.”

With drivers favoring a one-stop tire strategy on the most difficult track for overtaking, Webber effectively needed to make it to the first corner in front and then negotiate a clean pit stop.

“When days like this come along you can’t afford to let them go,” the 35-year-old Webber said. “You have to grab them with both hands and feet and hold on like hell.”

He beat Rosberg by 0.6 seconds and Alonso by 0.9 for his eighth career win - his second in three years at Monaco for Red Bull, which has won the last three here from pole position.

“It was reasonably straightforward at the start,” Webber said. “It’s just a matter of then getting back into a reasonable gap [with] the weather threatening.”

Alonso, who headed into Monaco level on 61 points with Vettel, stayed clear of trouble as the rain lashed down toward the end.

“It’s difficult in Monaco, but we managed the traffic,” he said. “We were praying for no more rain at the end because we know how difficult it can be.”

Several others failed to finish, including Jenson Button and Michael Schumacher.

Vettel drove brilliantly to place fourth, after starting from ninth, and Red Bull’s clever strategy of keeping him on the same set of tires for 46 laps worked to perfection.

“My start was one of the worst I’ve had in a long time,” Hamilton said.

Although the front six were relatively untroubled, there was chaos elsewhere.

The race was only seconds old when a crash took out four drivers, including Romain Grosjean, one of the pre-race favorites.

Schumacher appeared to nudge his Mercedes into Grosjean as they jostled for position, sending Grosjean’s Lotus spinning sideways.

Button, starting from 12th place, was caught behind the early traffic and dropped down to 14th as Vettel squeezed through a gap.

The top three positions stayed unchanged for the first third of the race, with Rosberg tucking in behind Webber, followed by Hamilton and the Ferraris.