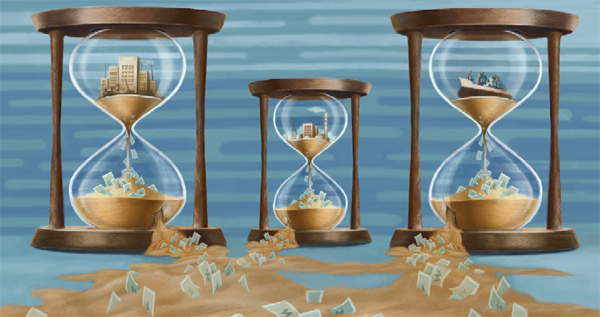 
Public corporations are created to provide services for the nation but they still rank as companies and need to stay profitable. In Korea, many are struggling to cover their interest payments, while others are loaded up to their eyeballs in debt.

According to financial disclosures by the government, many of the country’s 27 public corporations record losses or have years’ worth of debt repay. They are creaking under the weight of their borrowings due to price controls set by the government or large capital outlays from state projects. 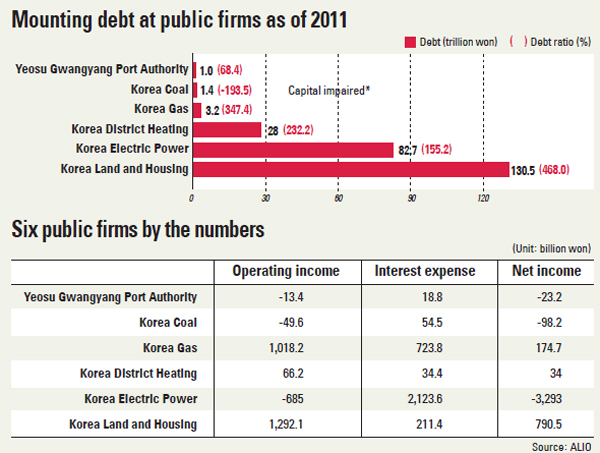 Yeosu Gwangyang Port Authority, founded last August, lost 13.4 billion won ($11.5 million) on sales of 23.4 billion won last year. This caused its operating profit to annual sales ratio to drop to minus 57 percent, meaning it lost 57 for every 100 won of sales.

In December, its interest coverage ratio stood at 0.6 - meaning its earnings only covered 60 percent of its interest payments - according to the Korea Investors Service, a local credit rating agency. The ratio is calculated by dividing operating income by interest expense.

Korea Coal is in even direr straits, having lost 49.6 billion won on sales of 190.3 billion won last year. As the government has imposed a price ceiling on coal, its production costs now exceed the supply price, causing losses to snowball. This is exacerbated by its restructuring costs, including retirement benefits owed, and continued capital investment such as expanding its mine shafts.

The corporation is already 1.4 trillion won in debt - nearly seven times annual sales - meaning that it will almost certainly not survive without the aid of government subsidies.

“The corporation has been restructuring for decades and its workforce has been slashed from 15,000 to 1,700. Now it doesn’t even have enough money to pay its employees’ retirement benefits and is incurring more debt to meet this need,” said a spokesman for Korea Coal. “Even if we wanted to mine more coal, we wouldn’t be able to because there is a strict government quota.”

Korea Electric Power Corporation (Kepco) is another example of heavily indebted public companies. The price of electricity is not high enough to cover its production cost. Coupled with the rising price of international crude, this has caused its losses to mount. Kepco posted a loss of 685 billion won on sales of 43.5 trillion won last year, leaving it saddled with 82.7 trillion won out of pocket with a debt ratio of 155.2 percent, meaning its total equity is significantly lower than its liabilities. It needs to repay 7 trillion won this year.

Kepco, the country’s largest power corporation, has called on the government to raise the electricity rate by around 13 percent to a more sustainable level. But Seoul has been reluctant to comply as it struggles to keep a lid on inflation. The body said the current charge only meets 87.4 percent of its production cost.

Meanwhile, Korea Land and Housing is a good example of how the government has failed in its housing supply policy. It has amassed 130.5 trillion won in total debt and is due to repay 13.3 trillion won in 2012, making it the nation’s most indebted public company.

It has been carrying out government projects, including building low-cost housing and developing innovative cities, and has a staggering debt ratio of 468 percent. With the stagnant real estate market, it is unlikely to earn enough to cover its debt obligations.

“Public companies have very high debt ratios, but a bigger problem is that their debt is growing too fast,” said a local credit rating agency employee, who wished to remain anonymous. “They need to be careful and maintain enough liquidity.”

According to RayTheM, a financial news Web site under Maeil Business Newspaper, the situation for the six aforementioned public corporations is close to critical. They are falling short in terms of their ability to raise capital, meet interest repayments, efficiently use capital and manage their debt ratios.

RayTheM said these companies would have speculative credit ratings if they were given stand-alone grades.

Despite the large debts and operating losses at public corporations, they have all been given credible investment grades, but this is mostly because they are backed up by government guarantees.

Korea Coal received a AA+ grade last June by Korea Investors Service, while the others were given AAA ratings. These were dished out despite Korea Land and Housing’s enormous debt hoarding and Kepco’s chronic losses.

“Public corporations have high credit ratings regardless of their financial status,” said an employee at the Korean credit rating agency. “They are special cases and receive a high degree of financial support from the government.”

“Public corporations receive ratings similar to Korea’s sovereign debt rating, and there is a strong belief that the government will step in to help them if something goes wrong,” said Kim Seong-tae, a researcher at the Korea Development Institute.

“The speculative grades given by RayTheM are warnings to the government as these corporations’ debt can be passed on to the government and hurt the country’s financial standing,” Kim said. “They should improve their financial status before this is allowed to occur. A new administration should help them streamline projects rather than start new ones.”