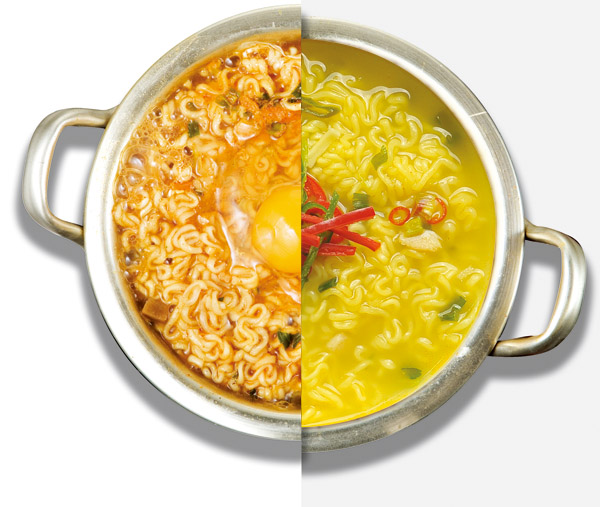 Was the white ramen boom just a fad?

Last year, ramen with a white broth changed the landscape of the local ramen scene at a time when many Koreans were used to instant noodles with a formidable spicy red color.

Statistics from Nielson Korea showed white soup varieties led by Paldo’s Kokomen, Samyang Food’s Nagasaki Champong and Ottogi’s Kissmyun controlled only 7.9 percent of the market in April, down from March sales’ of 12.9 percent.

When white soup noodles were in their heyday, they controlled 17.1 percent of the entire instant noodle market last December. This even forced Nongshim, the No. 1 maker, to roll out HooRooRook Kalguksoo, or Korean-style knife-cut noodles, in January.

Market observers say the figure indicates people who showed interest over a different soup are naturally migrating back to a traditional red-soup broth.

“When white ramen first came out, I rushed to stores to grab it because I was curious and I wanted to try something different,” said Cho Yun-ah, a 27-year-old company worker.

“After trying them for six months, I got sick of it. I switched back to the red broth because it’s spicier and less oily than the white-broth ramen.”

The market share for Kokomen, a chicken soup flavor which is credited with pioneering the fad, fell to 2.1 percent in April, down from 6.9 percent in December.

Nagasaki Champong, a seafood-flavored soup, dropped to 4.4 percent from 6.6 percent in the same period. Kissmyun was even worse with only 2 percent, down from 2.7 percent.

“Consumer’s curiosity over white ramen faded after they tried them and many stopped buying them again,” said an official at a local discount chain store.

The three white ramen brands totaled 11.5 billion won ($9.7 million) in sales in April, down from 18 billion won in March. When they were hot, a total of 30 billion won worth of white ramen were sold in December alone.

Market watchers said Nongshim’s Shin Ramyun and its other steady-seller red ramen brands are the greatest winners in this battle, as they have finally restored most of the market share and sales once assailed by their white challengers.

The changing consumption trend has also forced ramen makers to shift the direction of their product development and marketing to red ramen again.

“With consumers migrating back to red ramen, the entire ramen industry’s focus is on developing red spicy noodles,” said Yoon Sung-hak, a spokesman for Nongshim.

“Traditionally ramen were mostly consumed in packets, but manufacturers are expected to release cup noodle versions of their new red spicy products. It’s an attractive market and the war on cup noodles will intensify.”