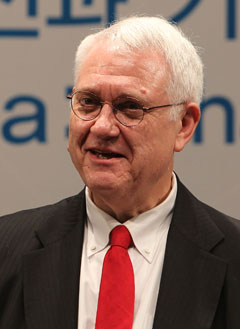 China is quite committed to “introducing more economic change and reform in North Korea,” said John Hamre, defense expert and president and CEO of the Center for Strategic International Studies, a U.S. policy think tank.

He said that China has a great deal more understanding about what is going on in North Korea than they let on, and that they were “absolutely furious” with North Korea when they sank the Cheonan and attacked Yeonpyong Island.

“A slow evolution away from the current system” is more likely than a collapse scenario in North Korea, he stated. Citing that cell phones are becoming ever more popular in North Korea, he said that there still is plenty of “blind loyalty to the propaganda of the government, but there is also a broadening of horizontal knowledge” and that there will be much more of a pluralistic leadership environment in the future.

Since 2000, Hamre headed CSIS, a nonprofit organization headquartered in Washington that celebrates its 50th anniversary this year.

Hamre further said that the top priority of the U.S. administration’s foreign policy is stability in Asia and to help Europe get through the economic crisis.

The U.S.’s relationship with China will be more difficult in the next 10 years, he said, as China is becoming a more “sophisticated country,” and has more conflicting interests and more independent activities from regional actors than in the past.

Q. The North Korean foreign ministry issued a statement stating that from the beginning it has not envisioned military measures such as nuclear test measures. Is this pressure from China?

A.It probably means several things - one, there probably is a big debate inside North Korean political circles and there is not a consensus on what to do. Second, it probably does reflect pressure from China to the North, saying don’t make things harder. My personal hypothesis is that it’s a combination of Chinese pressure and the still unsettled leadership transition in North Korea .?.?. Does this mean anything? They can reverse this in a day. So I don’t think we read into it any strategic significance, but I do think it reveals some interesting tactical developments. There’s no benefit to North Korea outside of the twisted logic of their egos to detonate a nuclear device.

What is the U.S. policy against China’s provocative actions and evolving naval strategy, and how do you assess their recent behavior?

There were episodes in the South China Sea. There was a nasty standoff with Japan over the Senkaku Island fishing incident. Then, of course, most importantly, when North Korea attacked the Republic of Korea first by sinking the Cheonan and then by attacking the civilians on Yeonpyong Island, China had to decide did they want good relations with North Korea or South Korea, and they picked North Korea because I think they were still afraid of the collapse of North Korea. That was the low point, two years ago. Since that time, China has been working hard to calm the waters to try to create better working relations; it has reached out to South Korea, it surprised everyone by being critical of North Korea with the missile launch, for example. I think China’s trying to manage how everybody thinks about them here in Asia.

But it seems like U.S.-China relations are not bad now. Is it really the era of G-2?

I do not think it’s G-2; I think that it completely overstates the nature of this relationship. It implies that the U.S. can control the international environment and can grant partnership to China to do the same, which I don’t think is true. I think the U.S. still remains a global superpower, but we are not able to accomplish things unless we have the support of allies. So we’re not in any position to act like G-1 and certainly not in a position to grant China the status of G-2. I think China is terrified of that idea because China does not want to take on the burden of running the international system. China wants to continue to take advantage of the international system that others run.