Contagious diseases back from past

Contagious diseases back from past 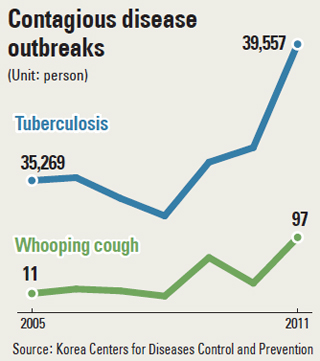 For a long time, the highly contagious bacterial disease pertussis, commonly known as whooping cough, was considered an illness of the past. In recent years, however, Korea has seen a growing number of mostly young patients being infected by the disease that was widespread in the 1960s and 1970s. Other diseases once common in the past, such as tuberculosis, are becoming more frequent today.

Last Friday, a group of high school students in Youngam, South Jeolla, were found to be infected with whooping cough. Of the 266 students and faculty members who showed symptoms of the disease, 36 tested positive, while a separate group of more than 100 middle school students based nearby are also showing symptoms - inflammation of the throat and severe, persistent coughing.

According to the Korea Centers for Diseases Control and Prevention, it is the first time in 40 years for a mass outbreak of whooping cough after a group of 186 elementary school students in Hongcheon, Gangwon were infected in May, 1973.

Korea maintained an alert on whooping cough until the 1980s. Back then, more than 1,000 patients were infected by the disease every year. 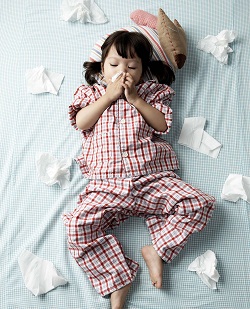 In the 1990s, the number started to gradually drop, reaching 10 per year in the early and mid 2000s. From three years ago, however, more Koreans have become vulnerable to the bacterial disease.

Lee Jong-koo, former director of the Korea Centers for Disease Control and Prevention under the Ministry of Health and Welfare, explains the phenomena as “the paradox of contagious diseases.”

“In the olden days when we [Koreans] were poor, we were moderately exposed to viruses, which raised our level of immunity,” Lee said. “Today, however, living conditions have improved and our bodies respond to even a small virus and become infected.”

According to 2011 data released by the Ministry of Education, Science and Technology, only 32 percent of the total number of high school boys exercise three times a week, while only 11 percent of the girls in high school do so. Professor Lee said students lack exercise, which weakens their immune system and makes it easier for viruses to attack.

“The reason why Koreans are becoming more vulnerable to past diseases today is because the government has loosened control, thinking that people are less exposed to a poor environment,” said Jeon Byung-ryul, head of the Korea Centers for Disease Control and Prevention. “People also worry less about being infected by the diseases that were once considered life threatening in the past.”