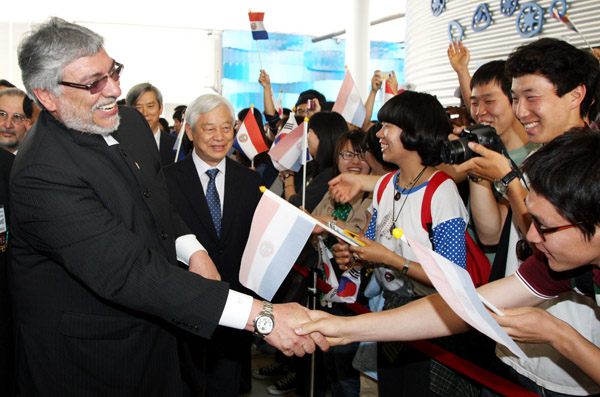 Paraguay’s President Fernando Lugo, left, shakes hands with visitors at the World Expo in the southern coastal city of Yeosu yesterday to become the first head of state to attend a National Pavilion Day celebration. Lugo attended the event to commemorate the Paraguay National Day at the Expo Hall along with several other officials from the Latin American state. The World Expo organizing committee has allocated one day to each of the 104 participating countries, holding events to welcome their participation in the 93-day Expo.

Lugo flew into Seoul on Sunday for his second trip to Korea, following a visit in 2008 as president-elect of the Latin American nation. Korea and Paraguay forged diplomatic ties in 1962. Trade volume between the two countries amounted to $205 million last year. [YONHAP]