Friendly versus No. 1 Spain to be tough test

Friendly versus No. 1 Spain to be tough test 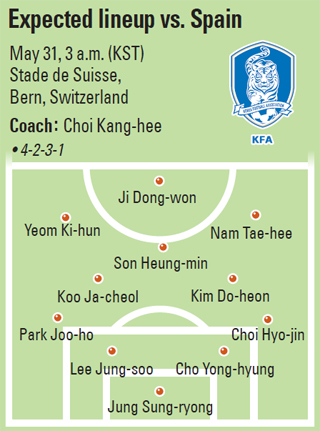 The Korea national football team will face world No. 1 Spain today (3 a.m., Thursday, KST), hoping to get in shape before facing Qatar and Lebanon in their 2014 FIFA World Cup final round Asian qualifiers next month.

The Taegeuk Warriors, ranked 31st in the FIFA rankings, arrived in Switzerland last Thursday and have been training at Yverdon Stadium in Yverdon-les-Baines, Switzerland before moving to the Stade de Suisse Wankdorf in Bern, Switzerland, yesterday.

Manager Choi Kang-hee said the friendly against Spain will be a tune-up match for their first final round Asian qualifier against Qatar. The 53-year-old also said although Spain and Qatar differ in quality and style, he will be able to test tactics and evaluate fitness during the friendly match.

Among the 26 players, those from Ulsan Hyundai (Lee Keun-ho, Kim Young-kwang, Kim Shin-wook and Kwak Tae-hwi) haven’t joined the national team since their K-League club still has a match today.

Choi has already said that for the friendly versus Spain he will build his team around overseas-based players since the K-League players need to rest after coming off weekend league matches.

With Arsenal striker Park Chu-young left off the squad due to his shyness regarding a military-dodging controversy and Bolton Wanderers winger Lee Chung-young also absent to recover from a lingering injury, some young overseas-based attacking players are eyeing to take their spots.

Pundits say that Sunderland striker Ji Dong-won, 21, will likely fill the void left by Park in the match against Spain. Nam Tae-hee, who plays for Qatari club Lekhwiya SC, and Hamburg SV striker Son Heung-min will also likely be tested.

In the center midfield, Wolfsburg midfielder Koo Ja-cheol, who had a fantastic season after getting loaned to Augsburg FC, will be the main man to watch, but Celtic FC midfielder Ki Sung-yueng will not start in consideration of his recent recovery from a hamstring injury.

On the defense, Lee Jung-soo and Cho Yong-hyung are ready to take the back line. Two defenders currently play for Qatari club Al Saad and Al Rayyan, respectively. In particular, Cho, who was a core member of the 2010 World Cup squad but joined the national team for the first time in 14 months, is aiming to become a regular member in the upcoming matches.

Park Joo-ho, who plays for Switzerland club FC Basel, will be desirous to fill the left back position that hasn’t found a consistent starter since Lee Young-pyo retired.