The KBL must fix its current free agent system

The KBL must fix its current free agent system 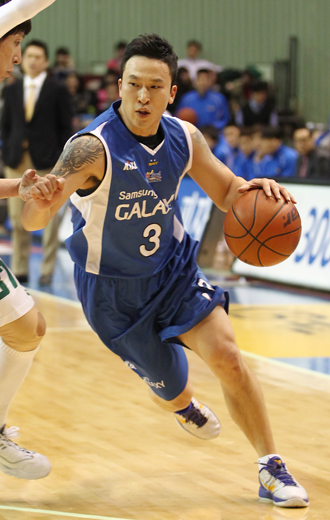 The Seoul Samsung Thunders’ Kim Seung-hyun received a warning last year after saying the current FA system is no different than “slavery.” By Kim Min-gyu

It’s been almost a week since the Korean Basketball League closed its last free agent (FA) negotiation period. Among 36 players who declared free agency, 23 were able to sign new deals, while 11 failed to get any contract offers until last Thursday.

Two players, including the 38-year-old forward Choo Seung-gyun, who is the all-time second best scorer (10,019) and five-time winner of the KBL title, retired before the FA market opened.

Those who failed to land contracts can still remain in the KBL through the minor league draft or as apprentice players, but chances are low. Among them, the 37-year-old veteran point guard Shin Ki-sung, who won the Most Valuable Player award in the 2004-5 season, already announced his retirement after his final negotiations with the Incheon ET Land Elephants fell through.

While those who got new deals mostly re-signed with their original teams, including Wonju Dongbu Promy center Kim Joo-sung, who inked a five-year deal worth 3 billion won, or $2.55 million (450 million won as salary and 150 million won as incentives on-year) some big names will play in a different jersey next season.

For example, Park first signed with his original club, the Sonicboom, and then his club traded him for the Knight’s first-round rookie draft pick for next season.

The statistics show it is rare for a player to move to another club as a FA. Over the last five years, 174 players have earned FA rights, but only 18 have moved to new clubs benefiting from FA rules. That’s only 10.3 percent.

This isn’t a surprising trend because under current KBL rules, the FA market is destined to be frozen.

If the seller club forfeits these rights and decides not to renegotiate with their FAs, then the other clubs can sign without the compensation even if the player’s salary ranking was in the top 30. Seo Jang-hoon, who is the KBL’s all-time leader in points and rebounds, was able to sign with the Sonicboom last week after Changwon of the LG Sakers decided to release him without conditions, but this was a rare case.

Still for most clubs, the compensation seems to be a big burden and not worth it in an exchange for FA players. And for this reason, the competition in signing FAs, whose salary ranking is over 30, gets more heated up rather than signing big FA names because there is no compensation needed for signing less-expensive players.

When a player earns FA rights in the KBL, he first negotiates with his current team, just like a FA system in other sports. But strange things happen in the KBL when the negotiation with original club fall through and other clubs starts to make movements on the FAs.

From that stage, the player has no choice on his destination because under the KBL rule, the FA player must sign with a club that made the largest bid for him. Honestly speaking, free agents are “sold” instead of picking their choice of clubs. If he rejects the best offer from a club, the player will get penalized from the league.