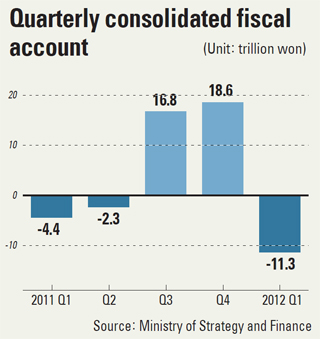 The fiscal deficit in the first quarter widened from a year earlier on greater government spending to bolster the economy, the Ministry of Strategy and Finance said yesterday.

The consolidated fiscal account, which reflects the central government’s total income and expenditure, posted a 11.3 trillion won ($9.6 billion) deficit during the January-March period, up 6.9 trillion won from a year earlier, the ministry said in a report.

The increase stemmed mostly from a sharp rise in consolidated fiscal expenditure as the government front-loaded this year’s budget to bolster sluggish growth.

The government’s total income came to 85.6 trillion won in the three-month period, up 6.9 trillion won from a year earlier, with tax revenue growing 3.8 trillion won over the same period, the ministry said.

The latest report showed the consolidated fiscal account, excluding social security funds, reached a deficit of 21.7 trillion won during the three month period, up 8.4 trillion won from a year earlier, the ministry said.

Korea’s economy expanded 2.8 percent on-quarter during in the first quarter, with Seoul expecting growth to hit 3.7 percent this year from 3.6 percent in 2011.

However, the recent turmoil in the global market, particularly the deepening woes in Europe, is expected to affect Korea’s economic growth.

The OECD recently lowered Korea’s economic outlook to 3.3 percent just a month after revising it to 3.5 percent in April.