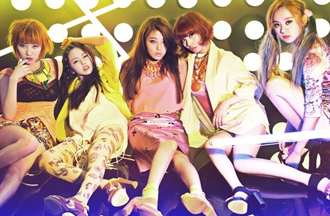 Just five days until the release of its new album, the Wonder Girls revealed a group shot that showed the members showcasing a new concept for the upcoming album.

In the picture uploaded at midnight yesterday, the five girls are decked out in colorful attire and makeup.

“As one of the most beloved girl groups in Korea, the Wonder Girls will return this summer with songs that will get everyone swaying,” JYP Entertainment said.

The entertainment agency said that the group’s new sound will be “totally different from the kind of music the girls have been producing until now.”

Just last week, the agency announced that the girl group was finishing up work on its new album and that it would be released on Sunday.

The agency added that on July 7, the band will perform its first solo concert in Korea in more than three years.

“It will take place at Jamsil Indoor Gymnasium and it will be bigger and better than ever before,” the agency said.