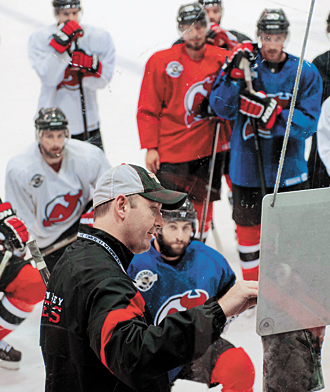 New Jersey Devils head coach Peter DeBoer, left, outlines a play on a board during their practice in Newark, New Jersey, on Monday. [REUTERS/YONHAP]

The once-unthinkable best-of-seven championship series opens Wednesday in New Jersey and marks the finish line of a punishing two-month playoff grind that has produced upset after upset.

After scraping into the postseason as the eighth and final seed in the Western Conference, Los Angeles will try to write a Hollywood ending to their storybook playoff run by capturing the 45-year-old franchise’s first Stanley Cup.

The sixth-seeded Devils have won three Stanley Cups since the Kings made their only appearance in the finals in 1993 but another championship would mean no less to a money-losing franchise that is in search of investors.

With the Lakers and Clippers out of the National Basketball Association playoffs, there is plenty of hockey buzz in Los Angeles as the Kings’ unlikely run has brought out the Hollywood glitterati with A-listers from David Beckham to Tom Hanks taking up prime seats at the Staples Center.

“We’ll probably have to get a bigger bandwagon,” said Kings forward Dustin Penner.

“It’s great for the city, great for hockey, especially in Southern California.

“We have a pretty rabid fan base and I think you’ll see more of that now.”

It may not be the dream New York-Los Angeles final the NHL had wanted but the Devils and Kings should offer some attractive hockey as East coast grit faces off against West coast glitz with Newark, New Jersey, long portrayed as home to mobsters and once labeled America’s most dangerous city, against Los Angeles, the sunny home to the rich and famous.

While the two cities offer stark contrasts the teams very much mirror each other, relying on brilliant netminding, solid defense and some flashy offensive weapons up front.

Since securing a postseason berth, the Kings have reigned supreme, racing through the West by going 14-2 in knocking off the top-seeded Vancouver Canucks, the second-seed St. Louis Blues and the third-seed Phoenix Coyotes while winning an NHL-record 10 consecutive playoff road games.