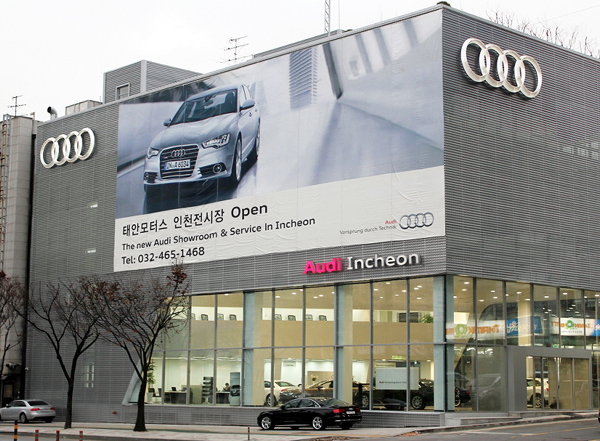 
Imported car distributors are opening up more showrooms outside of the greater Seoul area as the Seoul metropolitan market is increasingly saturated.

According to the Korea Automobile Importers and Distributors Association (Kaida), 23 out of 34 imported car showrooms opened up outside the Seoul and Gyeonggi areas from November 2010 through December 2011.

As the imported car market in the Seoul metropolitan area is becoming more saturated, importers are going as far as Jeju Island to tap a growing imported customer base in provincial areas and regional cities.

The portion of the country’s imported car showrooms outside the greater Seoul area increased to 48.8 percent, or 120 out of 246, in December 2011 from 44.5 percent in October 2007, according to the Kaida.

Deutsche Motors, one of BMW’s official dealers in the country, said early this month it would open a showroom in Jeju City in September. It will be the first showroom for the brand on the island.

As of now, only Mercedes-Benz and Chrysler have one showroom each in Jeju.

Deutsche Motors is aiming at professionals in Jeju and car rental companies. “There are a growing number of young people considering Jeju Island as a residential area, not just as a place for tourists,” said a Deutsche Motors official.

Most recently, a showroom of Sunin Motors, one of Ford Sales and Service Korea’s dealers, reopened a larger showroom in Seo District, Gwangju, the company said yesterday. The company said it is not only responding to growing sales outside the Seoul metropolitan area but is also trying to create future demands.

“Expanding and reopening a showroom in Gwangju will strengthen Ford’s sales and service network as we are boosting our investment in Korea with the free trade agreement,” Jung Jae H., CEO of Ford Sales and Service Korea, said in a statement.

Dealers’ growing interest in provincial areas and regional cities is attributed to rapidly rising sales outside the Seoul metropolitan area.

Imported car sales in Seoul climbed only 4.3 percent in 2011 while sales in Daegu and Incheon jumped 56 percent and 93.3 percent in the same period, respectively. The figures in Gwangju and Daejeon also shot up 24.9 percent and 32.2 percent.

It also costs much less to open a showroom outside of Seoul. It costs up to 10 billion won ($8.5 million) to open a showroom in Seoul while it costs half the amount to do so outside the Seoul and Gyeonggi areas, due to real estate costs.

Three showrooms opened up each in Busan and South Gyeongsang in 2011 while two opened in North and South Chungcheong together.

Another three showrooms started business in North Jeolla in the same period.

The Haeundae District in Busan, in particular, has surfaced as a new center for imported car sales.