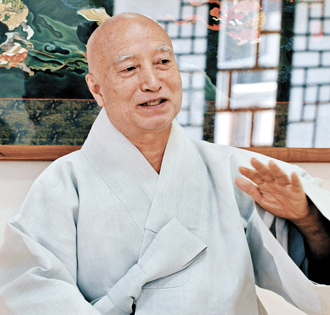 Monday marked the celebration of Buddha’s birthday and stood as a day of celebration in Korea. But monks of the country’s leading Jogye Order were dealing with mixed feelings.

The public was shocked when Venerable Seongho, a former official of the Executive Office of the Jogye Order, disclosed video footage showing eight monks playing poker, drinking expensive whiskey and smoking cigarettes in a hotel in South Jeolla.

The controversial video clip forced Venerable Jaseung, executive director of the office, to issue a public apology on May 11, but critics said it will take a long time for Korea’s largest Buddhist sect to regain the public’s trust.

In an interview with the JoongAng Ilbo on May 20, eight days ahead of Monday’s festivities, Venerable Seoljeong, the “spiritual director” of Sudeok Temple in Yesan, South Chungcheong, said the Buddhist community should see the scandal as not a setback but as an opportunity to root out moral problems. “I’m even ashamed of meeting people nowadays,” he said. “I personally know [everyone who appeared in the clip] and I wonder why they did such a thing. I resent and deplore what happened. But in another respect, I think the scandal happened for a reason. It’s like waiting for shares to bottom out in the market so you can reorganize the company.”

To become a spiritual director - bangjang in Korean - a monk must have completed 20 three-month retreats and have been ordained for at least 40 years. Those filling the post can be reappointed after a 10-year term, according to the Jogye Order.

Venerable Seoljeong became a monk in 1955. After graduating from Seoul National University’s horticultural science department in 1976, he served as the head monk of Sudeok Temple in 1978 and as chairman of the Jogye Order’s general meeting in 1996. He rose to his current post in 2009.

Q. So, that was quite an explosive video clip. How did the monks stray so far from their moral compass?

A. Korean Buddhism was suppressed for 500 years during the Joseon Dynasty (1392-1910). And during Japanese colonization (1910-1945), the Japanese government adopted policies to wipe out Korean Buddhism. During colonization, most monks got married, which was absolutely unthinkable under Buddha’s religious rules. Although monks looked the same from the outside, their spirits had been compromised.

To break down such wrongful practices, a cleanup campaign was launched in 1954 to normalize our religious order. The move was led by Seon Hagwon [an academy for Zen practitioners], which was established in 1920, and was supported by 460 monks, including Venerable Mangong and Venerable Seonsa from Sudeok Temple. Although many of them had a strong will to reform the community, they lacked experience. This led monks to wrangle over the reform issue frequently, and fights often broke out - even involving iron bars, Molotov cocktails and local gangsters. We became self-destructive. We ran our assets into the ground during that period and paid scant attention to nurturing fresh talent. Our denomination of Buddhism also failed to modernize. This has led us to appoint unqualified people as head monks and grant them the power to run temples. All of this proved ultimately catastrophic and resulted in the evils we are seeing today.

Just how many monks have been corrupted in this way?

The number is limited. Those monks who faithfully carry out their duties are, of course, very upset about the recent scandal. I think the negative energy triggered by the scandal will continue. We’re living in an era where bad deeds can no longer be concealed or covered up. Information spreads too quickly for that, and rightly so.

Shouldn’t the problem monks be removed from their posts?

I think [a reshuffle] will happen naturally. Those who have erred will naturally correct their wrong practices at the request of the Buddhist community. If they don’t, we’ll face a real catastrophe.

Some people are calling for the launch of an emergency committee to replace the Jogye Order’s executive chief.

Institutional reforms have taken place in the past, but the outcome was rarely satisfactory. Replacing personnel does not necessarily bring an immediate change to the community. What matters most is the will of the community. When those who want reform are clearly qualified to do so, it will be changed.

Are there any more deep-rooted solutions?

Better education and training is the only way forward, as both are lacking at the moment. Although there are monks who fully devote themselves to these areas, those who take care of our administrative affairs lack education. Even a store educates their staff well. What we need to do is train our members on a regular basis so that they can change and awaken their minds.

Do you have any final words to share with the Buddhist community?

I would like to apologize to the public. We will submit to the whip of public censure, but I don’t want people to take this issue as a cause for despair. This is a process through which Buddhism can move forward. I don’t believe that Buddhists here have lost their faith because of this scandal. We will surely encounter better times than now if we think positively and continue to improve ourselves.