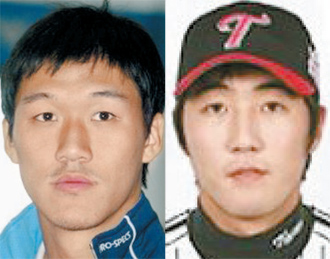 After seeing Park driving her Mercedes-Benz sedan alone in front of the Gangnam District Office in Samseong-dong, Kim and Yoon followed her in a Hyundai Tucson SUV, which they had stolen at around 8 p.m. on Friday from the valet parking area of CGV Theater in Cheongdam-dong.

At 2:20 a.m, Kim then approached Park in the parking lot of her luxury villa complex in Cheongdam-dong and threatened her with a knife.

Kim wore a mask to cover his face when he pulled the knife on her. He told her to slide into the front passenger seat of the Mercedes and drove toward the outskirts of Seoul while Yoon followed.

They were looking for a good place to transfer Park into the SUV, but she jumped out when the car slowed to 10 kilometers (6.2 miles) per hour.

Kim then ditched the Mercedes, got in with Yoon and took off.

Park hailed a taxi driven by a man surnamed Cho, 54, and started chasing them while reporting her location to the police by phone.

After being chased for two minutes by Park, Kim and Yoon got out of the stolen SUV and tried to flee on foot.

The police apprehended Yoon near Youngdong High School in Cheongdam-dong, a mere 300 meters (984 feet) from the kidnapping scene and arrested Kim a few minutes later.

The police said that the two suspects had carefully plotted the crime since mid-May.

After figuring out they could steal a car from a valet parking lot by pretending to be a car owner, they then targeted Park after seeing her driving her Mercedes alone late at night.

The suspects testified that they were going to force her to withdraw money from her bank account and also take her jewelry.

The police said that Kim persuaded Yoon to join the scheme because he was also having financial difficulties.

Yoon played for the Twins until the 2011 season but wasn’t able to sign with any team due to his poor performance. The police said that the two met and became friends in the military.

“Kim borrowed 100 million won ($85,100) from a bank and invested the money in a company owned by his acquaintance, but he was struggling to pay the interest,” a spokesman for the Gangnam police said.

The police secured scissors, tape and rope from Yoon’s bag found in the stolen SUV.

Kim Dong-hyun was once a star player in Korean football. He was in the spotlight after being selected as the MVP player in the 2002 Asian Youth Football Competition held in Qatar where he led Korea to first place.

Kim then joined the Suwon Samsung Bluewings in 2004 and was greatly anticipated as an up-and-coming player in Korean football, but couldn’t adjust to the professional level.

Kim was banned from the league in September of last year after being convicted of involvement in match-fixing in the 2010 K-League regular season.