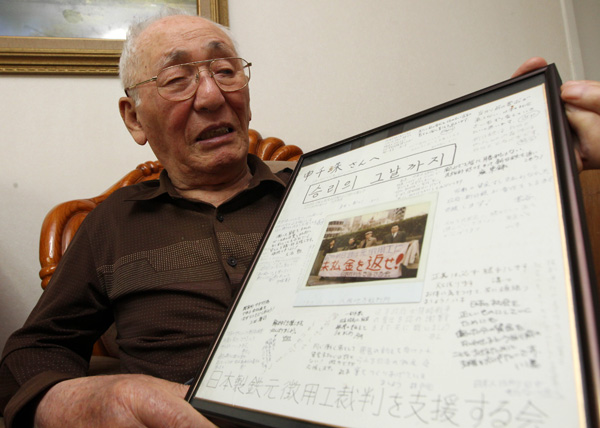 After the Supreme Court of Korea made a ruling that Japanese companies must pay overdue wages and compensation to labor conscripts of the Japanese colonial rule, Shin Cheon-su, who filed a petition in the early 2000s, talks on Monday about what he and his friend Jeon Jae-sik had to endure when they were conscripted to forced labor at a Japanese factory in Osaka. By Ahn Seong-sik


Boarding a ship bound for Osaka nearly 70 years ago, Shin Cheon-su, and Jeon Jae-sik, childhood friends from Jangseong, South Jeolla, didn’t know that what they thought was a vocational quest to Japan would rob them of their youth and haunt them for the rest of their lives.

Both aged 16 at the time, the duo were looking for work in Pyongyang during the latter part of Japan’s 35-year-long colonial rule of the Korean Peninsula. A job agent approached them with a promise that they would be able to get a “good job” in Korea after two years of job training in Japan.

They agreed, but soon discovered that they had been shanghaied into forced labor at a factory run by the Nippon Steel Corporation in Osaka, where they worked 12 hours a day without rest or pay.

The two conscripts would never have escaped their predicament had it not been for the U.S. air raid on Japan during the Pacific War.

“After the factory was destroyed during the bombardment, we luckily survived and were able to return to the country,” Shin said in the JoongAng Ilbo.

His story, one of the many revealing anecdotes regarding hundreds of thousands of forced Korean laborers in Japan, was heard recently in court as part of his long-running, unsuccessful bid to pursue a belated justice against the Japanese company.

Earlier this month, the Supreme Court of Korea shed light on it by ruling on a petition by Shin and three others, demanding the Japanese company pay overdue wages and compensation, the first such court decision since they started a legal battle in the early 2000s.

Shin wrote of the hard-earned victory to Jeon, who was killed during the Korean War, in a letter printed in the JoongAng Ilbo on Tuesday, where he also detailed their plight in Japan.

Shin said in the letter that he and Jeon were given different assignments. Shin cleaned furnace pipes and Jeon operated a steel mill.

After the grueling day’s work, during which Shin said they never straightened their backs, they were sent to small lodging rooms, separate from one another. Four or five workers were forced to sleep together in each room under the watchful eyes of Japanese guards, Shin said.

“Our rooms were different and so were our jobs, but you don’t know how much strength I gained from being together with you,” Shin told Jeon in the letter.

The two lost contact after Korea broke free from Japanese rule in 1945. Shin said he was too busy making ends meet to think of Jeon.

Later, he returned to his hometown and heard from Jeon’s mother that he was killed during the Korean War.

“Friend who left earlier than me, now rest your eyes in peace and go to a better place,” Shin wrote.